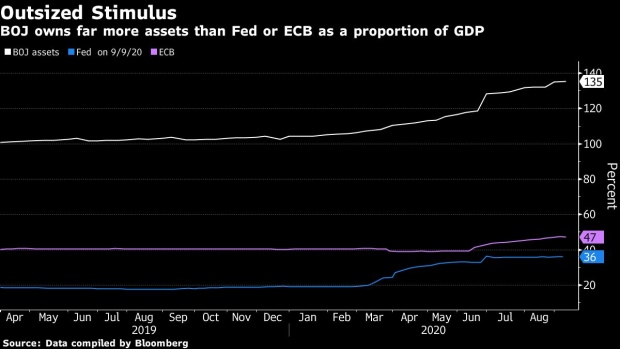 A pedestrian wearing a protective face mask walks past the Bank of Japan (BOJ) headquarters at dusk in Tokyo, Japan, on Monday, Sept. 14, 2020. The Bank of Japan left its bond-purchase amount unchanged at a regular operation on Monday. Photographer: Kiyoshi Ota/Bloomberg , Bloomberg

(Bloomberg) -- The Bank of Japan left its aggressive monetary stimulus untouched while upgrading its view of the pandemic-hit economy the day after Yoshihide Suga took over as prime minister pledging to continue his predecessor’s stance on monetary and fiscal policy.

The BOJ kept its key interest rate at -0.1% and left its asset purchases unchanged, according to a statement from the bank Thursday. The result was expected by 95% of 44 economists surveyed by Bloomberg.

Suga, who was elected Wednesday for Japan’s top job, has indicated he sees no need for any immediate changes in BOJ policies that have helped keep financial markets stable and get credit to companies amid Covid-19. The bank upgraded its economic assessment for the first time since the virus hit to reflect a bottoming in Japan’s slump.

The BOJ revised its assessment of conditions, saying the economy has started to pick up with activity resuming gradually. The bank said overseas economies were improving from a state of significant depression and this had helped turn production at home and exports toward a pickup.

Still, with the pandemic continuing to impact countries worldwide, the pace of improvement in Japan’s economy was likely to be only moderate, the bank said.

“The BOJ has played its role in fighting the pandemic,” Tokai Tokyo Securities strategist Kazuhiko Sano said before the decision. “Suga is coming in pledging continuity so there won’t be much impact on monetary policy.”

Analysts see gross domestic product rebounding an annualized 15.1% this quarter, a big jump, but not enough to make up for the record contraction in the three months through June.

The BOJ decision comes just hours after the U.S. Federal Reserve unveiled its latest policy guidance, committing to inflation that averages 2% over time and forecasting near-zero rates to continue through 2023.

The yen was trading at 105.06 against the dollar, little changed from before the decision.

While the Fed and European Central Bank look likely to adopt new easing measures within the year, the BOJ will hold off unless gaps between the policies causes the yen to gain sharply, according to economist Kentaro Koyama at Deutsche Bank AG.

“The BOJ has already crafted its policy on the assumption of long-term low inflation and has minimal room for further easing action,” Koyama wrote in a report.

Markets have been reassured by Suga’s pledge to continue the policies of his old boss Shinzo Abe and 95% of economists say the new prime minister won’t pressure the BOJ to make any changes.

Still, Suga’s vocal campaign against the high cost of mobile phone service for consumers suggests he may place less importance on the BOJ’s 2% inflation target than Abe did. Data due Friday is expected to show the consumer price index dropping back into negative territory.

Governor Haruhiko Kuroda will hold a press conference at 3:30 p.m. in Tokyo. Investors will watch for any subtle shift in his tone now that Abe, who hand-picked him to be governor, has stepped down.

Kuroda is likely to emphasize a desire to keep coordinating policy with the government under Suga’s leadership. Japan has the heaviest public debt load among developed nations, so Suga needs interest rates to stay low.

“The BOJ is hardly off the hook. It has put its 2% inflation target aside for now but hasn’t given up on reaching it eventually. The trouble is, inflation is headed the wrong way.”