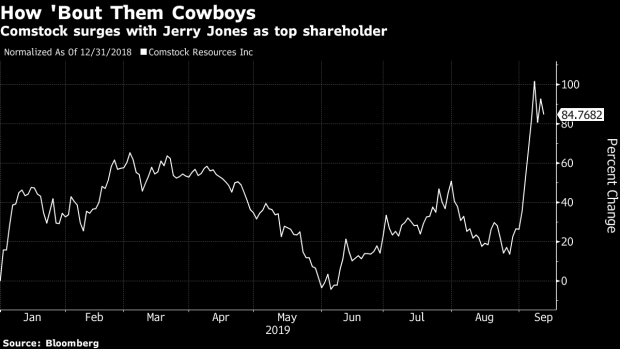 The billionaire owner of the National Football League’s Dallas Cowboys also controls 75% of Comstock, whose shares have surged 85% this year. Lately, investors heard “that Jones still has plenty of dry powder earmarked” for the company, New York-based investment bank Seaport Global Securities LLC said in a note to clients.

At a recent “non-deal road show,” Comstock management said Jones isn’t “afraid to inject another $1.1 billion into the company when the opportunity presents itself,” Seaport analyst Mike Kelly wrote. That would match the $1.1 billion that Jones has already put into Comstock over the past 1.5 years, Seaport said, and his continued presence is a major positive for the driller at a time when many oil and gas companies’ find it tough to access the capital markets.

One answer to that dearth of capital in the oil patch has been the joint venture announced earlier this week between billionaire Sam Zell and Tom Barrack Jr.’s Colony Capital Inc., which will let investors skirt management teams and directly own crude and natural gas assets.

So-called DrillCos, which use third-party capital to help exploration and production companies fund their capital spending programs, could emerge in the current environment, but that structure is more of a “vehicle of last resort,” according to Bloomberg Intelligence analyst Vincent Piazza.

Comstock told Seaport that Jones is committed to helping it reduce its borrowings, while also establishing a positive reputation among minority shareholders. Jones defended his bet on shale gas earlier this month, despite the 14% slide in domestic gas prices this year in the midst of glutted supplies.

Seaport reiterated a buy recommendation on Comstock and boosted its price target to $11 from $8, saying the driller has “a long runway of some of the highest rate of return inventory in the space, an advantaged geographical footprint that capitalizes on strong Gulf Coast gas prices, and near unrestricted access to the Bank of Jerry Jones.”

To contact the reporter on this story: Michael Bellusci in Toronto at mbellusci2@bloomberg.net

To contact the editors responsible for this story: Brad Olesen at bolesen3@bloomberg.net, Scott Schnipper, Steven Fromm