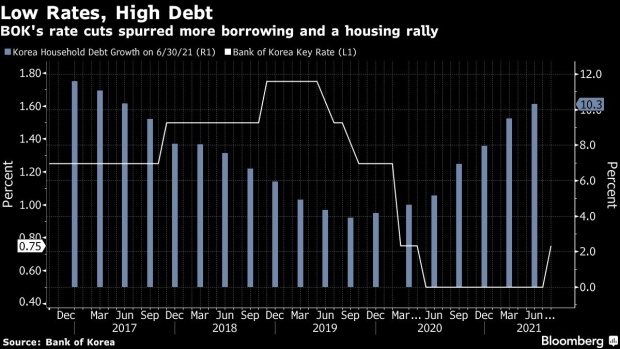 Signage for Bank of Korea (BOK) is displayed atop the central bank's headquarters building in Seoul, South Korea, on Thursday, Aug. 16, 2018. While the Bank of Korea has indicated that the next move in interest rates is likely to be upward and economists forecast one hike this year, the job market is making that an increasingly tough call. Photographer: Jean Chung/Bloomberg , Bloomberg

(Bloomberg) -- South Korea’s central bank held off from a second-straight rate hike on Tuesday, but signaled further moves are likely in the pipeline as it took note of rapidly rising home prices, inflation pressures and recovery momentum.

In a statement after holding the key rate at 0.75% on Tuesday, the central bank said it will “appropriately adjust” the degree of policy accommodation as sound growth and above-target inflation continue despite virus-related uncertainties.

The decision was predicted by all but one of 22 analysts surveyed by Bloomberg, with many expecting an increase at the next meeting in November.

Tuesday’s outcome shows the BOK is still on track to raise rates further but isn’t willing to rush its policy tightening as Covid outbreaks and an unstable global recovery raise the stakes of any policy missteps. The BOK has also said it will monitor shifts by the Federal Reserve when plotting its own moves.

“The BOK has entered a hike cycle because it’s now more concerned about debt and financial health than the economic recovery and that stance isn’t going to change any time soon,” said An Young-jin, an economist at SK Securities. “A hike later this year and another one early next year before the governor steps down is the likely scenario going forward.”

The BOK said growth this year will be around 4%, same as its earlier forecast. The bank expects inflation to run above August’s 2.1% projection for some time before cooling.

Data released after August’s rate hike support arguments in favor of further tightening. Home prices have continued to surge and inflation has stayed above the 2% target. The economic backdrop remains favorable, with export growth in double digits, low unemployment and a pickup in consumer confidence, though a slowdown in China’s recovery points to growing headwinds.

The housing market rally has been a particular concern for policy makers as it’s built on leverage and is at risk of a sharp correction should shocks emerge, while also exacerbating economic disparities. The BOK sees debt bubbles as a threat to long-term economic growth.

“It’s a matter of time -- probably about six weeks -- before the Bank of Korea follows up on its August rate liftoff with another hike.”

Korea’s government bonds gained on Tuesday as fixed-income investors took relief from the stand-pat decision. The three-year yield declined two basis points to 1.68% as of 10:48 a.m. in Seoul, but remained notably higher than a month earlier.

The won weakened further to briefly breach 1,200 per dollar, a level seen as a psychological threshold by investors and the authorities.

Of keen interest during Lee’s press conference will be whether any member dissented and called for an immediate hike. New member Park Ki Young has yet to make his policy preferences clear, though economists expect him to have a hawkish stance based on his previous remarks.

Dissenting votes calling for an immediate hike would bolster bets for an increase at the upcoming Nov. 25 decision.