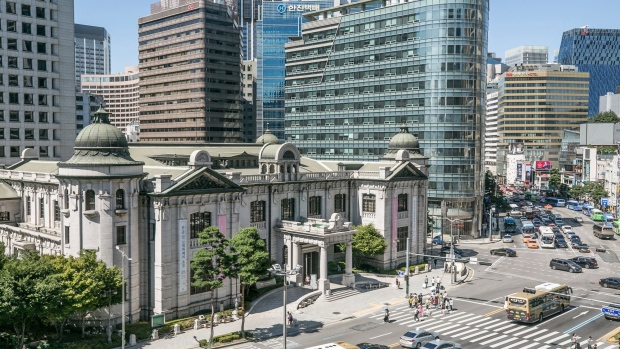 Pedestrians cross a road outside the entrance to the Bank of Korea (BOK) museum at the central bank's headquarters in Seoul, South Korea, on Thursday, Aug. 16, 2018. While the Bank of Korea has indicated that the next move in interest rates is likely to be upward and economists forecast one hike this year, the job market is making that an increasingly tough call. Photographer: Jean Chung/Bloomberg , Bloomberg

(Bloomberg) -- The Bank of Korea said it will “actively perform” its role to support the country’s transition to carbon neutrality and help minimize the negative impact on the economy, while falling short of offering a timeline on planned policy changes.

South Korea’s central bank said it’s reviewing tools across its loans, payment settlement and open market operations. A key constraint to implementing changes is the relatively small size of the green bond market and already-high demand for such securities from investors, a BOK statement said Thursday.

The BOK’s new focus highlights growing pressure on central banks to go beyond their inflation-targeting mandates and cater to broader socioeconomic goals. It also came as the country finalized a more ambitious target of cutting emissions 40% from 2018 levels by 2030, just days before the COP26 summit.

The South Korean bank in September said it will gradually apply ESG elements to all of its foreign currency assets.

Thursday’s statement also said efforts to reduce greenhouse gas emissions will increase production costs at high-emitting firms, potentially resulting in a more than a 50% drop in their share prices by 2050 from 2019 levels.