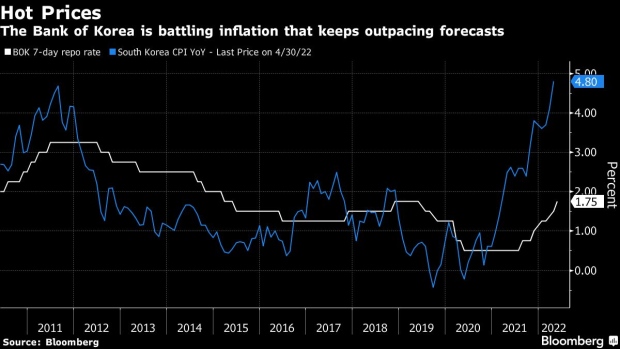 (Bloomberg) -- The Bank of Korea raised its key interest rate and forecast much faster inflation this year as newly installed Governor Rhee Chang-yong demonstrated his intention to tackle accelerating prices at his first policy meeting since taking the helm.

The South Korean central bank increased its seven-day repurchase rate by a quarter percentage point to 1.75% on Thursday for its fifth hike since last summer. All 18 analysts surveyed by Bloomberg had expected the move.

The BOK now sees inflation at 4.5% this year compared with its previous 3.1% forecast made in February. At the same time it cut its economic growth view to 2.7% from 3%.

The latest decision shows that Rhee is keen for the BOK to remain among the vanguard of central banks raising interest rates during the recovery from the pandemic. Most major central banks are now tightening policy as they grow alarmed by inflationary pressure fueled by pandemic-era stimulus, supply chain disruptions and Russia’s war on Ukraine.

Consumer prices in Korea grew at the fastest pace since 2008 last month and the governor has said that inflation is a bigger concern for the bank than other headwinds to economic growth.

“The jump in inflation forecasts signals the BOK is set to keep raising interest rates in the coming months,” said Cho Yong-gu, a fixed-income strategist at Shinyoung Securities. “But the necessity for a jumbo hike is still not large, given the BOK began its rate-hike cycle earlier than countries like the U.S., Canada and New Zealand.”

Rhee’s earlier suggestion that the BOK is open to a 50 basis point hike is essentially jawboning to tamp down currency volatility and inflationary pressures and doesn’t necessarily indicate he’s serious about doing that, Cho said.

Thursday’s decision follows April’s move by the bank to raise the rate by 25 basis points even without a governor in place.

The rate hike is the first since President Yoon Suk Yeol took office earlier this month. While Yoon has vowed to deliver faster economic growth, he has also highlighted inflation as a serious risk to the economy.

Inflation expectations this month climbed to the highest level in almost a decade, an indication that consumers are increasingly conscious of the upward trajectory of prices. If inflation accelerates too quickly, consumption is at risk of weakening in a setback for the recovery.

“Managing high inflation risk has become a high priority for the BOK and the government,” Citi economists Jin-Wook Kim and Jeeho Yoon wrote before the decision, forecasting more hikes to follow in July and October.

While omicron led to a slowdown in economic growth in the first quarter, a pickup in consumption after virus restrictions were eased and resilience in exports have enabled the BOK to stay on a path toward policy normalization for now. Economists surveyed by Bloomberg see the economy growing 2.8% this year after a 4% expansion in 2021.

Investors will be keen to see if there were any board members who expressed support for a half-percentage point hike Thursday, which Rhee said earlier the bank would be open to.

Rhee will announce any dissenters at a press conference that starts later in the morning in Seoul.