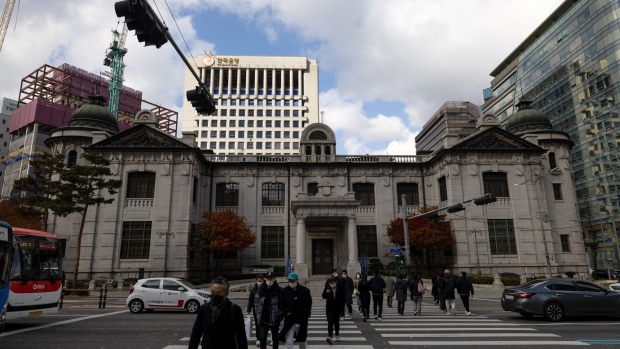 Pedestrians walk past the Bank of Korea headquarters in Seoul, South Korea, on Monday, Nov. 22, 2021. Bank of Korea Governor Lee Ju-yeol has sent clear signals that he intends to hike rate at the monetary policy committee meeting, scheduled on Nov. 25. , Bloomberg

(Bloomberg) -- Bank of Korea Governor Rhee Chang-yong signaled the end may be near for the country’s unprecedented streak of policy tightening to curb inflation, returning to a smaller interest-rate hike as concerns grow over economic growth and credit markets.

“I am aware that the pain among economic players is deepening as rates rise and the economy weakens,” Rhee said Thursday, adding that the BOK is focusing on relieving price pressures quickly so that rates can start to stabilize soon.

His comments came after the board unanimously agreed to hike the rate by a quarter-percentage-point to 3.25%, a decision forecast by 15 of 17 economists surveyed by Bloomberg. The bank has raised the rate by a total of 2.75 percentage points since August last year, including two half-point moves.

Three board members now see the peak rate of the cycle just another quarter-percentage-point hike away while one already thinks enough has been done, Rhee said at a press briefing. Two members want the BOK to stay open to a terminal rate above 3.5%, he added.

While the split view on the terminal rate shows the finish line of the cycle isn’t decided yet, the switching back to a smaller hike and the comments by Rhee suggest the bank is closer to wrapping up its tightening. Investors appeared to agree, with yields falling on both three-year and 10-year bonds, though further gains in the won muddied the picture.

“Rhee suggested what seemed like a Korean-style dot plot, and the median value of that dot plot points to a BOK terminal rate of around 3.5%,” said Kong Dongrak, fixed-income strategist at Daishin Securities. “That means there’s just one more rate hike left.”

The nation’s three-year bond yield fell 18 basis points to 3.68%. That contrasted with a jump in the Korean won by as much as 2% to 1,324.90, for its biggest advance in two weeks. Still, the currency’s gains were largely bolstered by an improvement in sentiment following the Federal Reserve’s meeting minutes that showed support for smaller US rate hikes and prospects of China reopening.

The resumption of smaller rate rises in Korea reflects concern among policymakers about a credit rout triggered by the default of a local government-backed developer. The BOK is also worried that further outsized hikes may excessively damp economic growth at a time when exports are already falling for the trade-reliant nation.

The BOK touched on these themes in its statement, saying the smaller rate hike was appropriate given a recent contraction in the short-term credit market, a further slowdown in expected growth and an easing of pressure on the currency.

In an updated quarterly forecast, the BOK projected the economy to grow at a slower than previously forecast pace of 1.7% next year. In August, the bank saw an expansion of 2.1%.

“It will become harder to increase rates as time goes by, so the central bank is likely to deliver its final rate hike sometime in the first quarter of next year,” said Moon Hongcheol, a fixed-income and FX strategist at DB Financial Investment. “Bond yields should stabilize from here, but the won may stall around the current level because local exports have yet to recover.”

Regarding a contraction of the short-term credit market, Rhee suggested the response among investors to the recent default by a Legoland developer was exaggerated. Still, he vowed to step in with more measures if credit risks continued.

The default was an unexpected event that caused an “unnecessary and excessive loss of confidence in financial markets,” Rhee said.

As the two board members’ views suggest, inflation remains a major concern for the Korean central bank after it edged up to 5.7% in October.

Policymakers see consumer-price growth remaining elevated in a 5% range for some time, even though they don’t expect it to push significantly higher than that.

The BOK now sees inflation at 3.6% next year, a fraction weaker than forecast in August, but some analysts had looked for a bigger reduction in the view on prices.

The BOK’s rate is still likely to reach 3.75%, according to Ahn Yea-ha, an analyst at Kiwoom Securities Co. That fits in with the idea that the end of the cycle is near, but a consensus has yet to solidify on the terminal rate as risks persist.

“A smaller-than-expected cut in the 2023 inflation outlook suggests the BOK is going to keep its guard up over inflation,” she said.