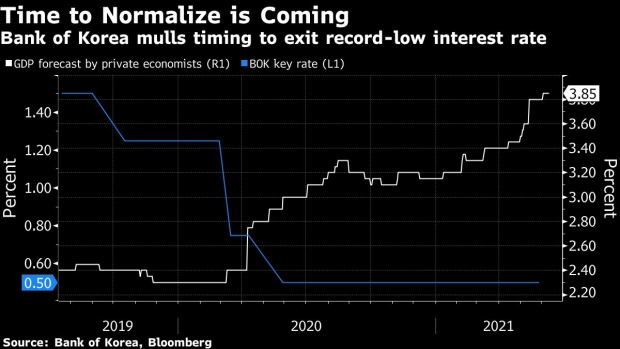 Lee Ju-yeol, governor of the Bank of Korea (BOK), attends a monetary policy meeting in Seoul, South Korea, on Wednesday, Oct. 16, 2019. South Korea’s central bank cut its policy rate for the second time this year in a widely expected move to tackle weakness in economic growth and prices. , Bloomberg

Bank of Korea Governor Lee Ju-yeol said the central bank will seek to normalize its policy at an appropriate time as the economy’s recovery solidifies, prompting a flurry of early rate hike forecasts.

In a Friday speech marking the anniversary of the central bank’s founding, Lee said stimulus policies have helped overcome the pandemic crisis, but have also widened inequality by accelerating asset price gains.

“The current accommodative monetary policy should start to be normalized at an appropriate timing in an orderly fashion if our economy is forecast to continue its solid recovery,” he said, according to a transcript from the BOK.

The timing of any policy change will be determined by the virus situation, the strength and durability of the recovery, and the risks from financial imbalances, he said. The BOK will “sufficiently communicate” with markets to minimize the impact in the process.

The governor’s anniversary speech is closely watched for policy signals. Some analysts had expected the speech to be a deja vu of the 2017 statement, when Lee’s comments on adjusting policy preceded a rate hike later that year. Economic conditions are similar to those in 2017, with faster inflation, mounting debt, and a chip-led trade boom.

The speech prompted more analysts to bring forward their rate-hike call to join Goldman Sachs Group Inc. and others seeing a change this year. Samsung Securities Co. and KB Securities Co. now see an increase as early as October, as opposed to their previous forecasts for the change to occur in 2022 or later.

Lee sent the first clear signal for a policy shift last month by saying the bank was preparing for an orderly exit from its record-low interest rate of 0.5%. In the bank’s quarterly monetary policy report on Thursday, the BOK escalated its warning on financial imbalances by saying a further accumulation could hurt growth potential.

Mounting financial risks from record household debt to booming cryptocurrency investments have made policymakers at the bank more wary in recent months.

“The problem of accumulating household debt has become more serious recently as leveraged investments increase in not only real estate and stocks but also virtual assets,” Lee said in the speech.

“The central bank is expressing stronger confidence on the economy and has upped its rhetoric against financial risks. While those comments show the BOK is charting its path toward policy normalization, we still think it will err on the side of caution in terms of timing.”

In the speech, Lee said the economy is recovering at a faster-than-expected pace from the pandemic, with strong export growth and consumption also emerging from a slump. Lee said while uncertainties associated with the virus persist, the recovery should become clearer in the second half of the year.

Exports rose the most since 1988 in May as a reopening of overseas economies boosted demand. Inflation has also risen over the bank’s medium-term target of 2% for two months. The government is considering its sixth extra budget of the pandemic, which should offer further support to the recovery if finalized.

Lee said financial market volatility could grow depending on global inflation trends and monetary policy expectations. He said the bank will take timely action to stabilize markets if needed.