Bank of Montreal’s top executive says it’s a “myth” that his company’s commercial lending business is taking big risks and argues the bank will come through the recession with fewer loan losses than rivals.

“I’ve got skeptics against me out there right now that there’s going to be a shoe to drop in our commercial bank because of loan impairments that will be higher in a  COVID recession than they might be in other recessions,” Chief Executive Officer Darryl White told Bloomberg in an interview. “I’m happy to take them on because I predict that we will continue in this environment to have lower loan losses than our peers.”

Bank of Montreal’s emphasis on commercial lending has helped the Toronto-based firm increase earnings in recent years while expanding in the U.S., where the company owns Chicago-based BMO Harris Bank and has an investment-banking presence. About 57 per cent of its loans were to businesses and governments in the fiscal third quarter, higher than the 41 per cent average for Canada’s six biggest lenders, according to the banks’ financial disclosures.

Yet with this year’s virus-fueled recession and a poor showing in the U.S. Federal Reserve’s annual stress test, some have questioned whether the bank is too exposed to business lending. Among Canada’s six large banks, only Bank of Nova Scotia’s share price has performed worse this year.

The Fed’s stress test results released in June concluded that in a “severely adverse scenario” the capital strength of Bank of Montreal’s U.S. holding company would be the lowest of 33 banks reviewed -- a finding the bank disputes.

“There’s a little bit of myth-busting that I think we need to do to get people enlightened on what our North American commercial business is and how powerful it is -- and how completely integrated it is with our Canadian business,” White, 49, said. “This is a leadership business that will be with us for a very long time.”

Bank of Montreal’s underwriting practices haven’t changed and its bankers have been able to select business clients they think can weather the downturn, White said, adding that he sees nothing in the current environment to suggest they’re going to face outsized losses. He aims to prove the naysayers wrong at a Sept. 30 investor event.

White became CEO of Canada’s fourth-largest lender by assets in November 2017. Within his first year he set a goal to increase earnings from the U.S. to a third of overall profit, up from about 24 per cent before he took over. The U.S. share of profit reached 34 per cent in fiscal 2019 and was at 32 per cent in the first nine months of fiscal 2020, according to company disclosures.

A U.S. earnings contribution between 33 per cent and 35 per cent is “comfortable,” White said, adding that he doesn’t see a need to deviate from that range.

“Relative to what I see today in terms of economic activity in Canada and the U.S., I think it’s a great number for us as a bank,” White said. “More of the same would be fantastic, but we’ll do it with the discipline on efficiency.”

White also reiterated his interest in improving productivity at what has been Canada’s least efficient bank, though he said his goal will be harder to reach because of the business impact from COVID-19. The bank has a target of improving its efficiency ratio -- a measure of what it costs to produce a dollar of revenue -- to 58 per cent or better on an adjusted basis by the end of fiscal 2021. The measure has fallen to 60.2 per cent for the year to date, an improvement from the 61.9 per cent level at the end of his first year.

“At this point, we’re not waving the flag and we’re going to stay committed to the objective,” White said. “It’ll be harder to get to, for sure, but we’re still on it.” 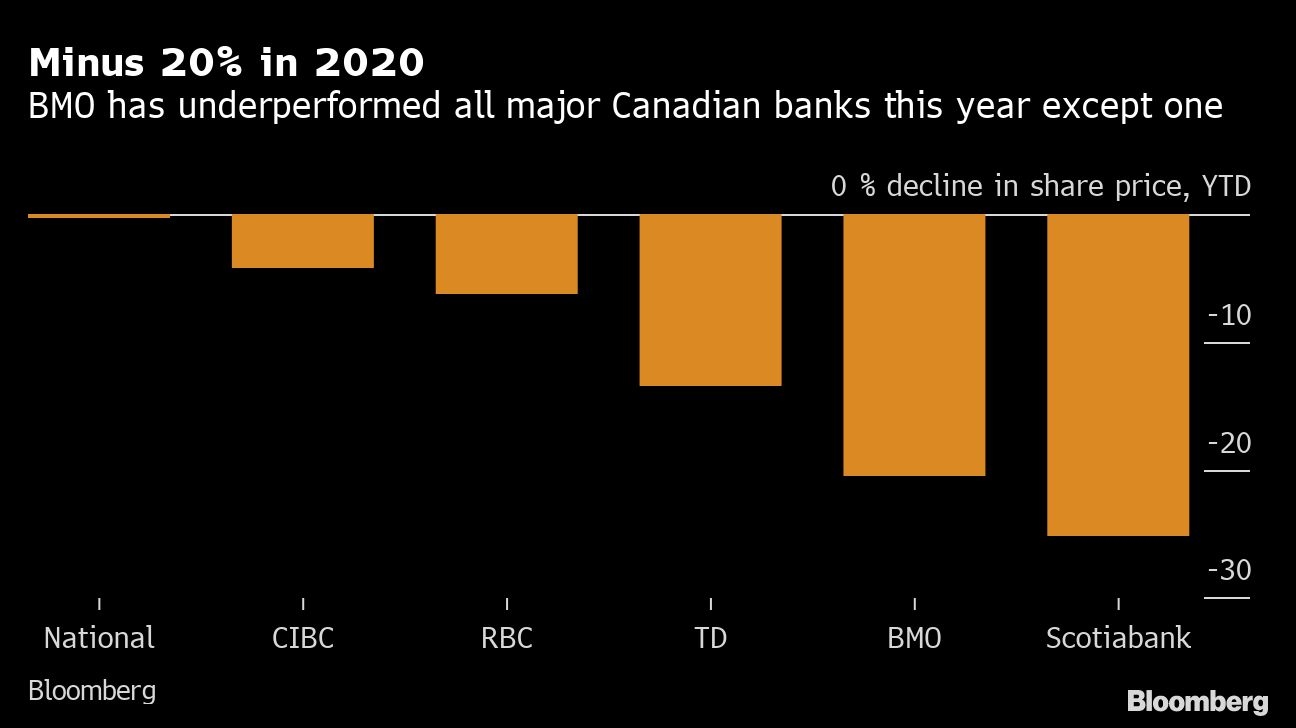 Separately, the bank set new diversity targets for the next five years, which include: