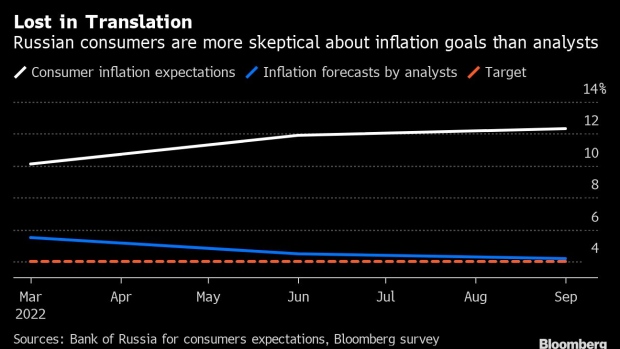 Elvira Nabiullina, governor of Russia's central bank, pauses during a panel session on day two of the St. Petersburg International Economic Forum (SPIEF) in St. Petersburg, Russia, on Thursday, June 3, 2021. President Vladimir Putin will host Russia’s flagship investor showcase as he seeks to demonstrate its stuttering economy is back to business as usual despite continuing risks from Covid-19 and new waves of western sanctions. , Bloomberg

A computerized neural network has spoken: central banker Elvira Nabiullina needs to use simpler language if she wants more Russians to believe she can really reduce inflation.

A study conducted by a pair of the Bank of Russia’s own researchers came to the perhaps less-than-shocking conclusion that figuring out central bank statements takes a degree in economics.

“All the main communication on monetary policy is accessible to only a professional audience right now,” Alina Evstigneeva and Mark Sidorovsky, researchers at the bank’s monetary-policy department wrote in an article published on a bank-sponsored website. “The potential for qualitative improvement in the language of communication is vast.”

The communications breakdown has important real-world implications, they argued. Ordinary Russians continue to be deeply skeptical of the central bank’s commitment to keep inflation to its 4% target, with polls showing most expect price growth over the next year to be about triple that. That doubt helps keep inflation high, according to the central bank.

Market professionals, who presumably have the economics education needed to understand the bank’s words, are much more likely to expect inflation to be closer to target.

The researchers ran the central bank’s key-rate press releases, transcripts of Nabiullina’s news conferences and other reports through a special research model to assess their complexity on a scale of 1 -- accessible only to people with advanced economics degrees -- to 10 -- comprehensible to elementary schoolers. Most of the communications on monetary policy scored between 1 and 3.

The central bank’s press service didn’t immediately respond to a request for comment on the report.

In her eight years as governor, Nabiullina has tried to popularize the bank’s work, appearing in YouTube videos and even singing a song about the ruble. She’s also thought to use her choice of brooches at press conferences as an indicator of the bank’s current mood on interest rates.

But even economists sometime struggle with her communications. In 2018, researchers from JP Morgan Chase & Co. found it was almost twice as hard to forecast the Bank of Russia’s rate decisions as those of other high-yielding emerging markets.