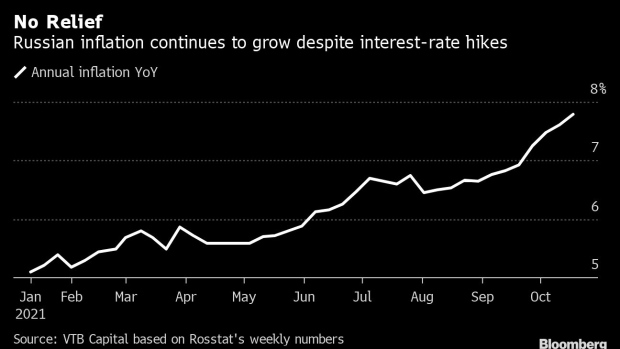 Visitors use an escalator at the Europeisky shopping mall in Moscow, Russia, on Thursday, Oct. 21, 2021. The Bank of Russia is set to raise interest rates, but uncertainty about the size of the hike has intensified. , Photographer: Bloomberg/Bloomberg

The Bank of Russia delivered its biggest interest-rate increase since July, surprising most analysts as inflation shows no sign of slowing.

The Bank of Russia raised the rate 75 basis points to 7.5% Friday, its sixth straight hike. Only one economist in a survey of 44 had correctly forecast the move, with the rest expecting an increase between 25 basis points and 50 basis points.

Bank of Russia Governor Elvira Nabiullina resorted to bold moves as price growth is unyielding, while economic growth started slowing down. The central bank has now boosted rates by a total of 325 basis points this year in an effort to contain inflation, which is running nearly double its target. A slowdown in the economic recovery may be further intensified by new Covid-19 restrictions imposed by authorities this week.