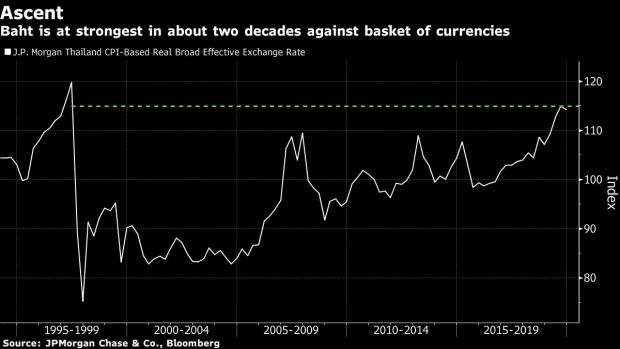 (Bloomberg) -- The Bank of Thailand said measures taken so far to curb capital inflows are “baby steps” and policy makers have plenty of tools available to deploy to curb the currency’s strength.

The scope and speed of the baht’s appreciation is out of line with economic fundamentals such as the current-account surplus, Don Nakornthab, a senior director in the central bank’s economic and policy department, said in an interview.

What monetary policy makers have done so far are “baby steps,” he said Monday in his office in Bangkok. “On capital-inflow measures, I think they have a lot of options,” he said, pointing to measures that some countries have used, such as holding periods, to curb hot-money flows.

The central bank in July imposed measures to counter short-term inflows and last month relaxed rules to spur outflows. The baht has climbed more than 8% against the dollar in the past 12 months, hurting exports and tourism and putting the economy on course for the slowest annual growth in five years.

The monetary authority has said it will review the relaxation of rules governing outflows every three months.

“Right now, there are some ceilings on certain limits, they could be lifted,” Don said.

Bank of Thailand Governor Veerathai Santiprabhob last month indicated scope for another interest-rate cut if economic growth disappoints. The policy rate has been lowered twice this year to 1.25%, matching a record low.

At the same time, Veerathai has cautioned against taking the benchmark interest rate below zero.

Don said the effective lower bound of the policy rate will depend mostly on how much can be transmitted into the economy.

Commercial banks aren’t allowed to offer negative rates, he said. They also have to pay a contribution of 0.46% of deposits to a bailout vehicle, the Financial Institutions Development Fund.

“So if a bank gets stuck with 0.5%, then 0.5% will be the lower bound from the FIDF standpoint,” Don said. “If the bank can’t follow through, it doesn’t matter how much we lower the interest rate, the transmission will not go.”

If there was a big upheaval like the global financial crisis, the contribution to the bailout fund would probably have to be removed to allow for large rate cuts, but such a scenario is a tail-end risk only, he said.

The central bank will lower its economic growth projections for 2019 and 2020, and is monitoring the progress of U.S.-China trade talks closely, he said.

While this year is likely to be the low point for the economy, the monetary policy committee was told in November that sub-3% expansion is a possibility in 2020, Don said.

“We still expect next year to be better than this year, but perhaps not much better,” he said.

(Updates with latest currency trading in second paragraph under chart.)

To contact the reporter on this story: Sunil Jagtiani in Bangkok at sjagtiani@bloomberg.net

To contact the editors responsible for this story: Sunil Jagtiani at sjagtiani@bloomberg.net, Nasreen Seria