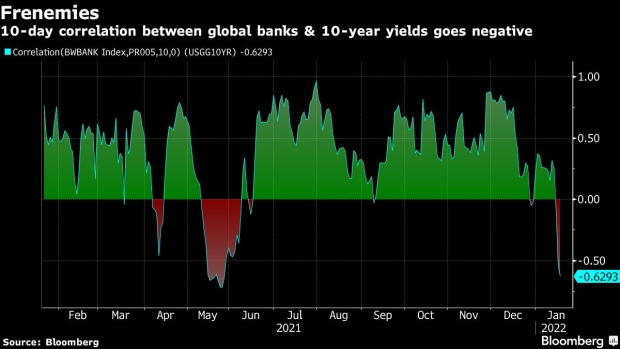 (Bloomberg) -- Bank stocks are becoming less attractive to investors as the global bond market prices in the rate hikes that are coming in 2022.

But that correlation has suddenly turned negative to over 0.6%, signaling that climbing yields are doing more harm than good.

This isn’t just happening in the U.S. It’s apparent around the world, too. The reason is the surge in nominal rates this time isn’t as much a sign of economic strength, as a consequence of the bond market pricing in an aggressive tightening cycle from the Federal Reserve and other global central banks to flight inflation.

The possibility of a 50-basis-point rate hike in March in the U.S. is reflected in money markets, which are pricing in over 25 basis points of tightening. Across the Atlantic, bets on a 10-basis-point increase from the European Central Bank have been pushed up to September, from October. That’s turned the yield on 10-year German bunds positive for the first time in three years.

While nominal rates rise, the yield curve continues to flatten and is far more related to lending for Wall Street’s biggest banks. That means the relationship between rising yields and surging financial stocks has a flaw, signaling that surging rates could crimp loan demand. So even though banks can charge more to lend, there will likely be fewer loans in the pipeline

The nuance here is that although the outperformance of banks compared to the S&P 500 Index has mirrored the surge in rates, the flattening yield curve does hurt the group. Add in the impact of rising inflation and reduced revenues as the finance industry raises compensation to retain talent, and it’s clear the bid for banks as a play on higher rates may not work this time.