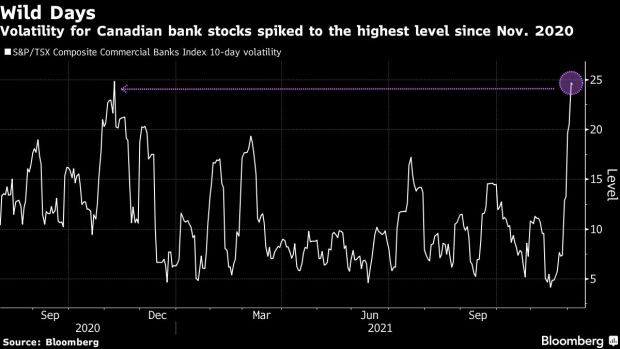 Bank of Montreal (BMO) signage is displayed on a building in the financial district of Toronto. , Photographer: Brent Lewin/Bloomberg

(Bloomberg) -- Canada’s bank stocks have had a wild ride this week, and they’re whipsawing the country’s main stock index.

A measure of 10-day volatility on the S&P/TSX Composite Commercial Banks Index hit its highest level since November 2020, as the six largest banks reported quarterly results amid jitters about the omicron variant and the Federal Reserve’s hawkish tilt.

A year ago, bank stocks -- which make up more than 20% of the broader S&P/TSX Composite Index -- were just as volatile. Parts of Canada were just entering what would become a monthslong lockdown to contain the spread of Covid-19.

The result has been an unusual divergence in performance, with Scotiabank leading the group with a 3.2% gain so far this week but National and CIBC tumbling. National’s 6.1% drop puts it on track for its worst week since October of last year.

Traders favored the banks with most to gain from rising inflation and higher rates. With their large U.S. loan books, Toronto-Dominion and Bank of Montreal have the greatest exposure to upcoming interest rate hikes, according to National Bank analyst Gabriel Dechaine.

“Improving business momentum at TD is supportive not only of the bank’s valuation, but it does make the stock more than simply a ‘play on rising rates,’” Dechaine said in a note to clients. “That said, TD’s above-average leverage to central bank rate hikes plays a pivotal role in our outlook for the stock.”

The S&P/TSX Composite was down 1.1% as of 12:58 p.m. in Toronto on Friday. If that holds, it will be the first time since January that the index has lost more than 1% on two separate days in a calendar week.