Canadian Western Bank is reaping the rewards from moving beyond its roots in the country’s ailing oil heartland.

Chief Executive Officer Chris Fowler is starting to see a payoff from years of transforming Canadian Western from an Alberta-focused commercial lender into a more geographically diversified, full-service bank targeting business owners. The Edmonton-based bank’s fiscal first-quarter earnings topped analysts’ estimates, helped by loan growth in Ontario and earnings from businesses that the bank has worked to bulk up, such as wealth management.

“We’ve got some very strong businesses in Ontario, where we see continued good growth opportunities and the opportunity for us to cross-sell into digital banking and wealth management,” Fowler said in an interview.

The company’s results for the three months through January, announced last week, gave the company’s shares their biggest gain in six months. The stock is up 17 per cent this year, the best performance in the S&P/TSX Commercial Banks Index.

While the bank opened its first Ontario branch late last year, much of the diversification came from acquisitions that bolstered its offerings in Canada’s largest province, including equipment-leasing businesses and wealth manager iA Investment Counsel. Canadian Western had 31 per cent of its loan portfolio in Alberta at the end of the fiscal first quarter, down from 48 per cent in October 2010. Ontario now accounts for 24 per cent of the loan book, up from 9 per cent. The bank’s second-largest market, British Columbia, has remained stable at about a third. 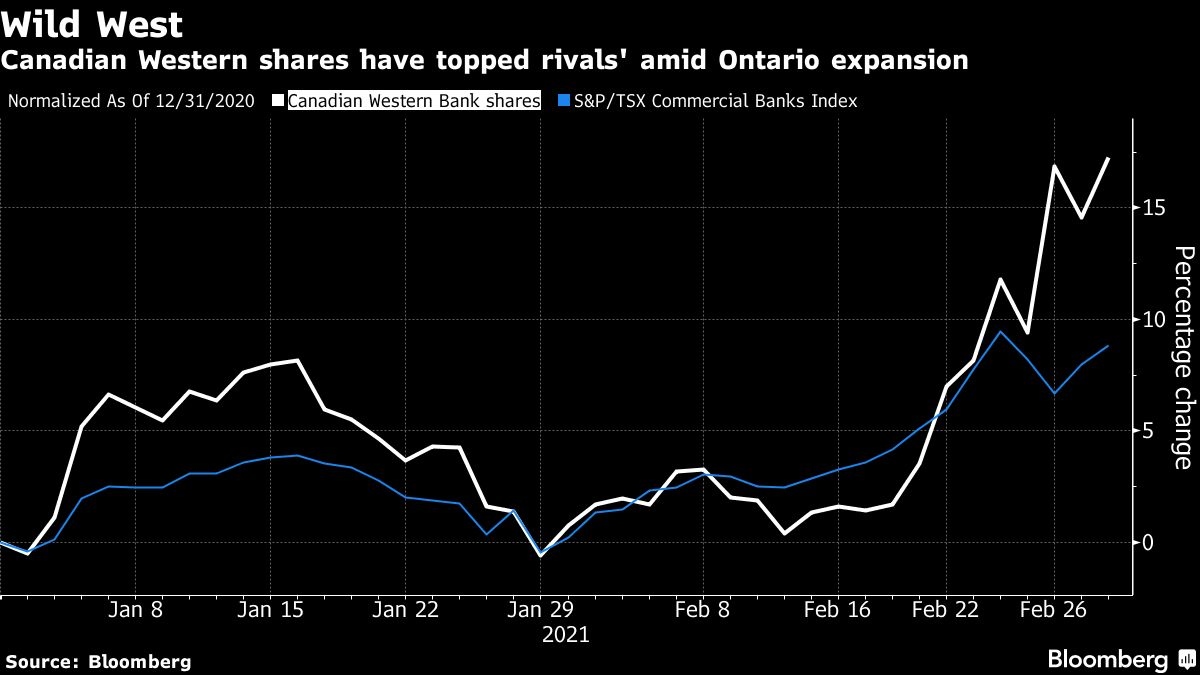 That puts the bank within reach of a goal it set about four years ago of having Alberta, British Columbia and Ontario each account for about 30 per cent of Canadian Western’s loan portfolio. The company generated loan growth of 14 per cent in Ontario last quarter, compared with 5 per cent in Alberta and 4 per cent in British Columbia.

Alberta’s oil-focused economy has been hit by two major price declines in the past decade. The first started in 2014, about a year after Fowler became CEO, when OPEC increased production to fight back against the U.S. shale industry. Crude hadn’t fully recovered from that decline when the pandemic hammered prices again last year.

The shocks have reduced investment in new projects and caused continued layoffs of energy-company workers. The province’s unemployment rate was 10.7 per cent in January, exceeding the 9.4 per cent national figure.

The industry may have a somewhat weaker recovery than after previous declines as limited pipeline capacity restrains local crude prices and output, Fowler said.

“Oil and gas won’t be the same engine that it was in the past,” said Fowler, who noted that less than 1 per cent of his bank’s loans are in direct oil and gas production. “I don’t think we’ll see a lot of growth capex in terms of larger capacity being added to production,” he said, referring to capital expenditures.

Beyond geographic diversification, Canadian Western also has gotten a lift from reducing its dependence on higher-cost broker deposits and moving more heavily into branch deposits that it pays lower interest on. That strategy has expanded net interest margin -- the difference between what the bank earns on loans and what it pays on deposits -- a key measure of profitability.

CIBC Capital Markets analyst Paul Holden upgraded Canadian Western’s shares to the equivalent of a buy last week after its net interest margin beat expectations for the second straight quarter, and because of the prospects that the improving economy will bolster loan growth.

“We think management guidance is conservative and that the shift in funding mix could lead to more net interest margin expansion,” Holden said in a note last week.

Canadian Western is working to keep the growth going with tools for bringing in new business clients entirely online, following last year’s roll-out of digital on-boarding for personal banking customers. The bank also plans to introduce in the second half of this year a cash-management tool for small- and medium-size businesses that will integrate with their accounting software and help them manage payables, receivables, inventory and payroll.

“We’re a growth-focused bank, and our goal is to find more clients and build our business by targeting business owners as our core market,” Fowler said. “We spend a lot of time and effort to make sure that we can be that full-service bank for our clients.”