Canada’s banks are spending 1.9 per cent more on bonuses for fiscal 2022 than they did a year earlier, despite a dramatic slowdown in investment-banking activity, as they try to retain talent in the hope of a recovery in the year ahead.

The country’s six largest lenders set aside $19.4 billion (US$14.5 billion) for performance-based compensation in the fiscal year that ended Oct. 31. That marks a sharp slowdown from the 18 per cent increase in bonuses in fiscal 2021 and is far short of the five-year average of 8.2 per cent.

Canada’s banks faced a difficult year in their capital-markets businesses, with initial public offerings and acquisition volumes plummeting from a record pace in 2021. There hasn’t been a single Canadian IPO over $1 billion this year. Still, top bankers remain hard to replace, so firms are reluctant to grow too stingy with pay.

The record pace of deals and bonuses in 2021 “was a bit of an anomalous event,” said Adam Dean, president of Toronto-based Dean Executive Search, which focuses on financial-services firms and asset managers. “To replicate that this year, even in the best of scenarios -- let alone one where we’re dealing with inflationary pressures and rising interest rates and an uncertain economic environment -- would be very difficult.” 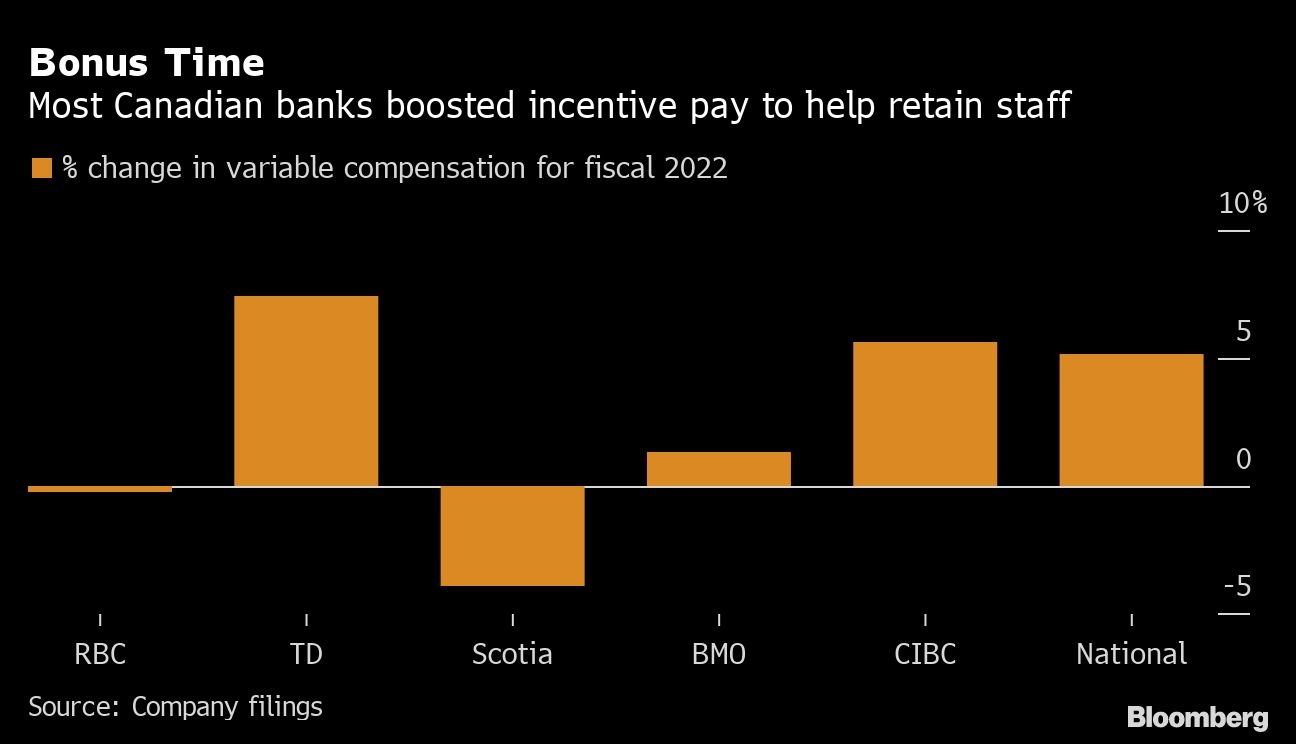 Canadian banks pay bonuses based on performance, with most of the variable compensation going to capital-markets professionals such as investment bankers, analysts, salespeople and traders. Variable compensation reflects the amount reserved, not paid out, and doesn’t include base salaries. Bonuses are typically distributed in December; the fiscal year ended Oct. 31.

Changes to incentive-pay pools range from a 7.9 per cent increase at Toronto-Dominion Bank to a 3.9 per cent decrease at Bank of Nova Scotia. Royal Bank of Canada, which has the largest capital markets business among Canada’s banks, also had the largest variable compensation pool at $7.13 billion.

A good portion of this year’s increases likely went to junior bankers, who have a lot of other opportunities, said Bill Vlaad, president of Toronto-based recruitment firm Vlaad & Co.

“There are so many firms on the buy side, like family offices and alternative products groups in asset management firms, that buying up this talent at record paces,” Vlaad said in an interview. “So firms are paying healthy compensation this year because they need to retain their people.”

While the mood on Bay Street currently is “sober,” firms are looking ahead to an improved environment in the year ahead, said Lara Zink, chief executive officer of Women in Capital Markets.

“There’s definitely some optimism that we’ll go into more of a shallow economic downturn and at some point in 2023 capital markets will be back open again for corporate issuers,” Zink said.

Here’s a breakdown of bonuses by bank:

Variable compensation at RBC was down 0.3 per cent to $7.13 billion. Chief Executive Officer Dave McKay said the bank’s success is built on its investments in people and pointed to the 50 managing directors it has hired over the past two years.

Toronto-Dominion had the largest increase among the Big Six, with a 7.4 per cent boost to $3.3 billion. Chief Financial Officer Kelvin Tran said the increase reflects a strong performance for the year as well as an increase in its employee base.

Toronto-Dominion is “focused on delivering compensation that is market competitive and performance based with practices in place to promote fair and consistent outcomes and alignment between executives and employees,” Tran said in an interview.

Scotiabank, which has had the largest share-price decline of the six banks this year, reduced performance-based compensation 3.9 per cent to $2 billion. That was the biggest decrease among Canada’s largest banks which reflects “the impact of this year’s challenging operating environment,” spokesman Clancy Zeifman said in an emailed statement.

Bank of Montreal increased performance-based compensation 1.3 per cent to $3.19 billion.

Canadian Imperial Bank of Commerce boosted performance-based compensation 5.6 per cent to $2.46 billion. “We’re very proud of how our team responded over the full year on many fronts, and our variable compensation reflects that full-year performance,” spokesperson Tom Wallis said.

National Bank of Canada, which gets a greater percentage of its revenue from capital markets activities than the other five banks, increased variable compensation 5.2 per cent to $1.34 billion. “Our variable compensation is mostly correlated with the bank’s results but also includes client metrics,” spokesperson Jean-Francois Cadieux said.