Canadians spent an annualized $5.9B on pot: Statistics Canada

Investors who are eager for the cannabis industry in Europe to emulate the boom in pot-stock listings in Canada may not have much longer to wait, judging by the activities of investment bankers. 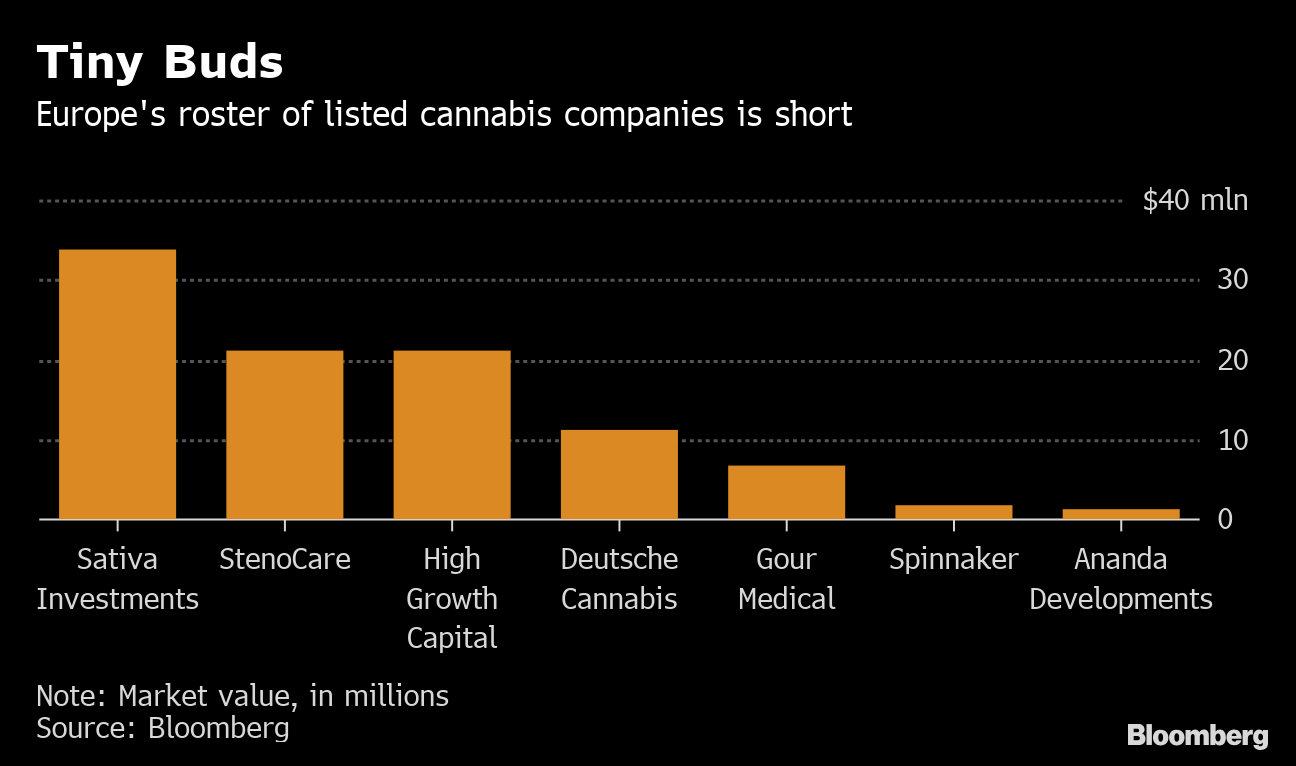 The firms are laying the groundwork for an expected increase in stock sales and mergers and acquisitions as companies seek to capitalize on Europe’s growing acceptance of cannabis, particularly for medical uses. There has been “significant” interest from medical cannabis companies for stock-market listings in Europe, said Tristan Gervais, the London-based Canaccord banker who’s spearheading the firm’s push in the region.

“A lot of companies from all over the world are looking to raise capital in London,” Gervais said. His sense of the market, and going by the experience so far, is that there is a “huge appetite from a wide range of investors.” Toronto-based Canaccord appointed Gervais as head of European cannabis investment banking in July.

That sense is borne out by others. Nick Davis, chief executive of London-based law firm Memery Crystal LLP, said advising firms in the CBD and medical cannabis sectors on raising money is his “full-time job at the moment.” He said there are “enough meetings each week that it’s taking up the majority of my time.”

Davis said his firm is working on about 20 active mandates. That covers some “significant” fundraisings and involves companies seeking to list on the junior AIM market and the Main Market of the London Stock Exchange, in addition to some private funding rounds. He added the brokers involved “are confident there will be institutional investors who want to participate” when cannabis firms start listing in London.

For now, the European market is basically uninvestable for managers of institutional equity funds. The region’s biggest listed marijuana name is London’s Sativa Investments Plc at about 26.8 million pounds (US$33.6 million). Canada is the definitive leader in the global pot industry: witness Canopy Growth Corp., with a market value north of US$16 billion, or more than US$7 billion apiece for Tilray Inc. and Aurora Cannabis Inc.

To be sure, it may be a good thing that the market has been slower to develop than in Canada, where recreational pot was legalized in October, because it may mean the region avoids the market frenzy that hit North America last fall.

The bubble, similar to the cryptocurrency craze before it, led to some odd corporate events, like the equipment-rental company that’s trying to reinvent itself as a maker of pot-infused drinks. Investors have been encouraged by signs that big food and drink companies are starting to explore cannabis, such as spirits company Constellation Brands Inc.’s investment in Canopy Growth.

Still, companies in Europe are starting to position themselves to take advantage of investor interest in cannabis:

London-listed cash shell Spinnaker Opportunities Plc last week agreed to take over Kanabo Research Ltd., which is working on formulations of medical cannabis oil and which has the distribution rights for a pharmaceutical-grade vaporizer.

Dermapharm Holding SE, a Gruenwald, Germany-based pharmaceuticals firm, shot higher on Tuesday after it agreed to buy a stake in a Dutch firm that produces medical cannabis for pharmaceutical applications.

The industry’s visibility is increasing too. Cannabis consulting firm Hanway Associates runs First Wednesdays, a networking event in London and Paris for people in the industry. About 30 people signed up for information on the events when they began in mid-2018, and now more than 500 have, Hanway co-founder Alastair Moore said.

Hanway, along with investment firm European Cannabis Holdings, is also behind the Cannabis Europa conference, which was held in Paris last month and will come to London in June at the Southbank Centre on the Thames. Canaccord Genuity is one of the partners for the gathering. Bankers were among the first to get interested in the networking opportunities, having taken note of the situation in Canada, Moore said.

“At the start it was smaller financial outfits who were watching Canada,” he said. Now, it’s a mix of professional services firms, “lots of entrepreneurs and lots of financiers looking for the next big deal.”

For European companies, catching up to Canada’s cannabis behemoths won’t be easy. “Success won’t come cheap,” said Richard Beresford, chairman of London-based law firm McCarthy Denning Ltd. Firms will have to spend money on research into efficacy and safety of their products, on securing the reliable supply of cannabis, to be on top of regulatory issues and to hire a “top-notch” advisory board in order to burnish their credibility with investors.

“The Canadian cannabis producers have a significant leg up on American and European companies,” Seaport Global Securities LLC analyst Brett Hundley said via email. Tilray, Aurora and Canopy Growth are already moving into production in Europe “so as to build relationships and take advantage of an expected unification of trade across the bloc itself in coming years.”

Winning the hearts and minds of the investment community will be essential in Europe.

“As far as many investors are concerned, medicinal cannabis is tainted both by its association with the recreational drug and by the comparisons being drawn with the dot-com boom and the crypto currency craze,” said McCarthy Denning’s Beresford. “Time will tell as to how quickly those perceptions will fade and more meaningful volumes of cash become available.”