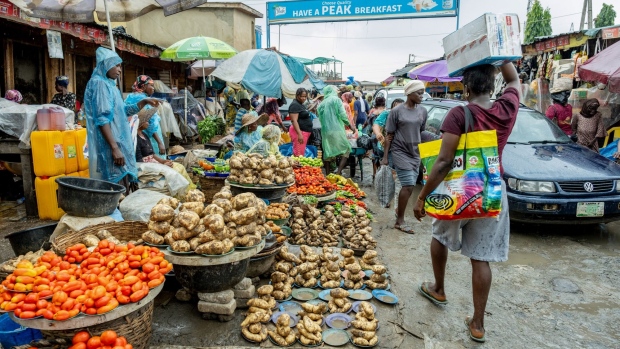 Vendors sell fresh produce in the rain at the Mile 12 food market in Lagos, Nigeria, on Thursday, July 7, 2022. Soaring inflation could push 15 million more Nigerians into extreme poverty by the end of this year, the World Bank said in its Nigeria Development Update report published this month. Photographer: Damilola Onafuwa/Bloomberg , Bloomberg

(Bloomberg) -- Francis Eze spent nearly a decade at one of Nigeria’s biggest banks working for a salary far lower than the one he’d negotiated in his interview. As a bachelor and then as a newlywed, he found a way to manage on a tighter budget.

His wife, a nurse, had long told him about colleagues at her hospital who had been recruited to move abroad but Eze wasn’t interested. Then with private school fees for two children coming due this year, the pair joined the flood of skilled Nigerians leaving the country amid a plummeting naira and a stagnating economy.

“I realised how insufficient the money was to take care of a family of four,” Eze, 38, said by phone from Toronto, where his family relocated in January. “I told my wife we should do as others were doing.”

The widespread brain drain from Africa’s most populous country -- popularly known as “japa”, which means “to run swiftly out of a bad situation” in the Yoruba language -- is having a devastating effect on the financial sector. Banks, already suffering from rising interest rates, higher operating expenses and threats of a spike in non-performing loans, are being forced to increase spending on training and recruiting, and in many cases lower their standards for new hires.

“It is a reality and we are just ensuring that we are recruiting more than are leaving,” Roosevelt Ogbonna, chief executive officer of Access Bank Plc, Nigeria’s biggest bank by assets, said by phone, without saying how many employees had left.

Better schools, higher salaries and more fringe benefits abroad, combined with a lack of local job security, is pushing mid- and early-career employees abroad, according to a report released this month by the Chartered Institute of Bankers of Nigeria.

Africa’s biggest economy has suffered through two recessions in the last six years. Soaring inflation, which hit a 17-year high of 20.5% in August, has eroded household purchasing power and shrunk local currency salaries. So skilled workers are turning to big western economies, where other Nigerians have built successful lives, particularly Canada, the US and the UK.

The number of Nigerians who received UK work visas rose to 15,772 for the year through June, from 3,918 in the year through December 2019, the last full year prior to the pandemic, according to a report by the UK Home Office released last month.

Last week, Moody’s warned that higher inflation and interest rates could see non-performing loan rates at Nigerian lenders spike. But for the banks, the concern over asset quality is currently being overshadowed by employee flight.

In a bid to fill the gaps, bankers are spending more time “training the existing workforce and equipping new graduates,” which may entail lowering the entry standards at some point, said Abubakar Suleiman, chief executive at mid-size lender Sterling Bank Plc. “The opportunity is to hire smarter, train better and make banking more responsive to fill the vacancies.”

The bankers’ union recommended offering remote work and modeling “the work patterns and the work conditions of their staff against global practices.” Ogbonna said Access Bank is looking beyond salary to create an environment that is “inclusive and conducive” to retain its workers, without elaborating.

Eze, who works for a food company in Canada, said ultimately it will come down to money.

“Unless you have good work conditions, including salary that can cover your cost and you also make some savings, even if a little, you’ll be thinking of where to run to,” he said.