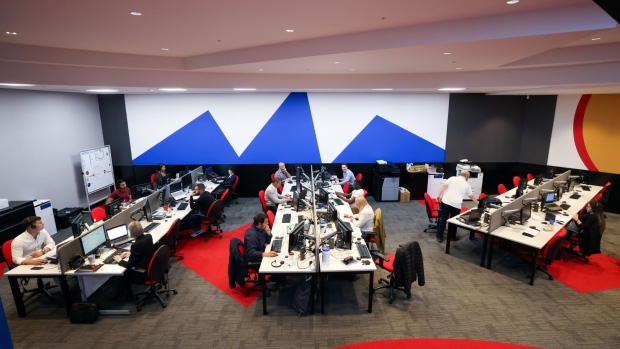 An employee removes their face mask at their desk in the offices of a branch of Metro Bank Plc in London, U.K., on Thursday, Aug. 26, 2021. , Bloomberg

(Bloomberg) -- Some two dozen Metro Bank Plc office staff got an early taste of what hybrid working will look like this week as they trialled their firm’s new approach to office life.

Hovering outside the lender’s Moorgate branch in the City of London until it opened at 8:30 a.m., colleagues on the bank’s financial crime team greeted each other in person on Thursday after a year and a half of remote work. Walking into the branch, they turned left and passed through a glass gate before descending into a newly opened basement office below the store.

The new space is part of a sweeping overhaul of the bank’s estate as the firm adopts a hybrid work model. It has vacated its standalone office building and redeveloped 78 of its branches to create office space above -- and in some cases below -- its branches.

The bank, which employs about 3,000 office workers, has 1,100 desks under the new hybrid system. From Sept. 13, teams will have access to offices via a bookings system that allows staff to book a desk in their neighborhood up to six weeks in advance.

Most of the 26 staff -- some of whom joined in the pandemic and had never seen the inside of a Metro Bank office before -- seemed to embrace the concept, saying they welcomed the flexibility the new system offered.

Companies around the globe are examining ways to adjust to a world where the pandemic has made remote work increasingly common. Metro Bank has taken more dramatic steps than most to adjust its operations.

Just three years into the 10-year lease of a dedicated office close to St Paul’s Cathedral in London, Metro Bank exited the building as the pandemic took hold last year, booking a 41-million pound ($56 million) charge in the process and displacing 900 employees.

The move signals the increasingly dramatic ways some banks are rethinking their office needs. U.K. lenders such as HSBC Holdings Plc and Lloyds Banking Group Plc also cutting their property footprint, while Standard Chartered Plc has signed a deal with flexible office landlord IWG Plc to provide office spaces closer to where its employees live.

“There’s not much of a difference because working above a store doesn’t mean you’re impacted by what activities are taking place in the store,” said Varela Jimngang, who works in an office above Metro Bank’s Holborn store in central London. “The only difference it that when you come into the building, you’ve got a different entry and a different exit.”