Concerns that runaway inflation will prompt aggressive interest-rate hikes and squelch economic growth have roiled equity markets this year, sending the S&P/TSX Composite Index down 11 per cent so far this year. While that decline is smaller than drops in the US and other equity markets, it has nearly frozen initial public offerings and share sales from Canadian companies.

The value of announced IPOs from Canadian companies plunged to about $1.37 billion this year through May, down 79 per cent from a year earlier, according to data compiled by Bloomberg. The value of other equity and equity-linked deals has dropped 68 per cent to $9.64 billion. 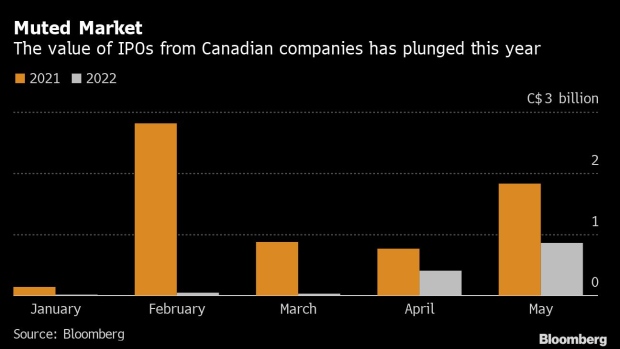 The decline follows a record year for both types of activity in 2021 as rock-bottom interest rates and surging equity markets prompted a flood of deals.

“It is shocking how quickly equity issuance can decline,” said Sante Corona, head of equity capital markets at TD Securities. The division of Toronto-Dominion Bank led the Canadian IPO league tables through May, driven by its involvement in a US$125 million offering from Dream Residential Real Estate Investment Trust, the largest from a Canadian company this year.

Market volatility isn’t likely to subside until central banks show that their rate increases are starting to bring inflation under control, Corona said. Even then, the first companies to venture back into the IPO market will be strong firms that price their offerings at attractive levels, he said.

“The companies that will reopen the IPO market are going to be high-quality, profitable companies,” Corona said in an interview. “They’re likely to come at meaningful discounts to market values because investors will want some margin of safety to make sure they perform.”

In the meantime, many firms that had planned IPOs are instead turning to private financing, which may push their eventual public-market debuts down the road a year or so, he said.

Similar dynamics may play out in the market for equity and equity-linked deals used to raise funds by companies that are already public.

For those types of deals, the Chicago Board Options Exchange Volatility Index, a key measure of market turbulence, will need to fall to around 20 before there’s a material change in the market, said Aine O’Flynn, head of investment-banking capital markets at Bank of Montreal’s BMO Capital Markets. The measure was above 31 on Friday.

“When markets become volatile, uncertainty seeps in, fear seeps in and people get paralyzed,” O’Flynn said in an interview. “It’s a challenging market.”

BMO Capital Markets led the equity league tables through May, with $957.4 million of deals, according to data compiled by Bloomberg.

While aggressive, 75-basis-point rate increases by central banks and signs that inflation has crested may help calm markets, the second half of the year is likely to be “challenging,” O’Flynn said.

“The Fed has tried a soft landing often, and they have not once been able to engineer that in at least six decades,” she said. “It’s going to be a bit of a rocky road.”