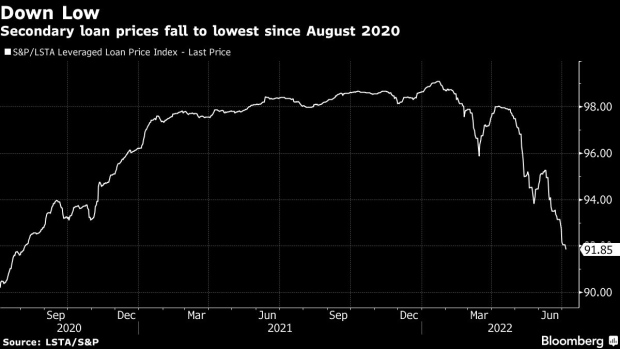 A sign sits on the Morgan Stanley U.K. headquarters in the Canary Wharf, business, financial and shopping district of London, U.K., on Friday, Sept. 18, 2020. After a pause during lockdown, lenders from Citigroup Inc. to HSBC Holdings Plc have restarted cuts, taking gross losses announced this year to a combined 63,785 jobs, according to a Bloomberg analysis of filings. , Bloomberg

(Bloomberg) -- A bank club led by Morgan Stanley has posted the steepest discount on a leveraged loan so far this year as Wall Street institutions struggle to lock down buyers for risky debt amid mounting recession fears.

The $500 million deal, which will finance gaming firm 888 Holdings Plc’s buyout of betting business William Hill’s international assets, is now being offered at 85 to 86 cents on the dollar, according to people with knowledge of the matter, who asked not to be identified discussing a private transaction.

That marks the lowest discounted price seen in 2022, coming just weeks after JPMorgan Chase & Co. offered 89.5 cents on the dollar for a $1.5 billion leveraged loan supporting the combination of Material Handling Systems Inc. and Fortna Inc., according to data compiled by Bloomberg.

The discounted deals are entering the pipeline as worries over a global economic slowdown continue to swirl, driving investors away from the high-yield market in recent weeks. Secondary loan prices fell below 92 cents on the dollar Tuesday, the lowest level seen since August 2020, and new issuance has also slowed to a crawl as banks delay debuting deals that could result in losses.

The buyout financing package for 888 also includes £600 million ($715 million) of euro-denominated bonds, with a deep discount on the floating rate note and a sky-high yield on the fixed portion to draw in buyers.

Commitments on the US leveraged loan sale are due at 5 p.m. New York time on Thursday, the people added.

Representatives for Morgan Stanley declined to comment, while 888 Holdings and William Hill did not immediately respond to requests for comment.

Fitch Ratings assigned a score of BB- to 888 Holdings in June. The company has a negative outlook, reflecting “uncertainty from regulatory updates, exposure to the UK economy, and a lack of leverage headroom,” said Fitch in its June 24 report.