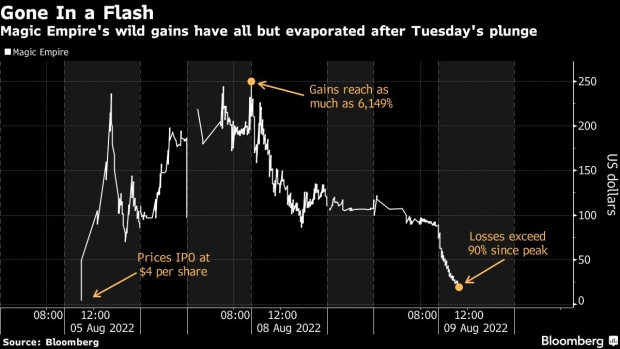 A man fishes along the promenade in the Central district of Hong Kong, China, on Saturday, June 11, 2022. Hong Kong is preparing to cocoon some 1,000 people involved in the city’s July 1 handover anniversary, fueling speculation that Chinese President Xi Jinping will attend the celebrations. Photographer: Louise Delmotte/Bloomberg , Bloomberg

Magic Empire Global Ltd., which provides underwriting and advisory services and has helped just one company go public in two years, soared as much as 6,149% since debuting in the US on Friday, giving it a market value of $5 billion at one point.

That meant co-founders Gilbert Chan and Johnson Chen had stakes worth $1.8 billion and $1.3 billion, respectively, according to data compiled by Bloomberg. The duo together controls about 63% of the firm.

However, the stock dived 89% on Tuesday to close at $12.32, merely three times higher than its $4 initial public offering price, and was little changed on Wednesday. That reduced the value of Chan’s stake to about $90 million and Johnson’s to $65 million.

Magic Empire is the latest in a series of inexplicable moves following IPOs in the US of companies from China or Hong Kong, places that have sometimes produced billionaires in mysterious ways. The advisory firm had just nine employees by the end of last year and reported that revenue fell 17% to $2.2 million in 2021. Since its inception in 2016, it completed eight listings -- one of them has since delisted and the others are trading below their IPO price.

Chan, Magic Empire’s chairman, studied accounting at the Chinese University of Hong Kong and worked as an auditor before spending nine years in the corporate-finance division of CCB International Capital Ltd. Chen, the firm’s chief executive officer and Chan’s former university classmate, was an auditor at KPMG before joining Guotai Junan Capital Ltd.

The two, both 41 as of the Aug. 4 IPO prospectus, believed there was a lack of corporate-finance advisers for small and medium-sized companies in Hong Kong and created Giraffe Capital Ltd., Magic Empire’s operating entity. The name was inspired by Chan’s son, who loves the animal, Chan said during an interview at the Hong Kong Institute of Certified Public Accountants last year.

“These volatile stocks have several elements in common: poor liquidity and small market value before the surges,” said Kenny Ng, a strategist at Everbright Securities International in Hong Kong. “Investors should avoid the overspeculation as the current unrealistic price has gone too far from the financial fundamentals.”