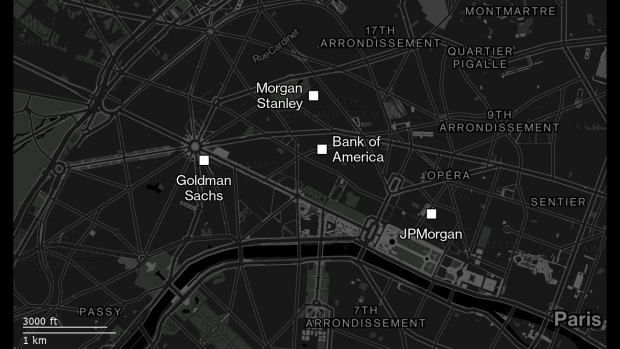 A commuter uses an escalator in the La Defense business district of Paris, France, on Monday, Nov. 9, 2020. France's economy will take a smaller hit from the new lockdown to contain the spread of Covid-19 than it did during the tighter restrictions on activity earlier this year, according to the country’s central bank. Photographer: Benjamin Girette/Bloomberg , Bloomberg

(Bloomberg) -- One investment banker in Paris says not a week goes by these days without a call from a headhunter pitching him a job. Another was given an unexpected raise in June after an annual bump just a few months earlier.

With everyone from JPMorgan Chase & Co., Goldman Sachs Group Inc. and Morgan Stanley to Bank of America Corp. and Citadel beefing up operations in the French capital, the city has become one of the hottest job markets in Europe for finance professionals. Wages are rising and placement firms say they’re struggling to find promising candidates.

U.S. financial firms that for decades used London as a gateway to Europe’s single market are opening offices or bolstering existing operations on the continent to keep their access to the bloc. By the end of this year, Paris will have added 3,000 finance jobs thanks to Brexit, French Finance Minister Bruno Le Maire said in June. Many think that’s just the beginning.

“The first bank relocations in Paris have created a comprehensive financial ecosystem that’s set to draw in more financial institutions,” said Arnaud de Bresson, managing director of Paris Europlace, an industry group that promotes the city as an international financial center. “Hedge funds, asset managers and other financial services providers are also looking to be part of it. It’s a snowball effect.”

With some banks struggling to convince their U.K. staff to trade the Thames for the Seine, the jobs shift is turning into a mix of relocations and local hires. That’s left long-dominant French firms fighting to keep talent. Just a few months after asking staff to share in the pain of a rough 2020, France’s biggest investment banks are dangling pay bumps and flexible work arrangements to retain top performers.

And days when junior bankers in France were paid less than their U.K. counterparts may soon become history. A Paris-based entry-level M&A analyst can now command a base salary of between 60,000 euros and 70,000 euros, fast catching up with London, headhunters said. A manager at a French bank grumbled that American banks are overpaying bankers and skewing the market.

While on average compensation in France remains lower than in the U.K., “there has been pressure on salaries since Brexit as local banks are trying to match what foreign institutions can offer,” said Stephane Rambosson, co-founder of executive search firm Vici.

Relocations, meanwhile, are having an impact on the city’s life. Butchers and coiffeurs -- reluctant speakers of English -- are rolling their tongues around unfamiliar words. Rents on new commercial property have risen almost 16% since 2017 in spite of the pandemic, and seats at international schools are hard to secure.

“With only one available spot for seven applicants, the demand is very pressing,” said Bernard Manuel, chairman of Paris-based bilingual school Ecole Jeannine Manuel -- which counts U.S. Secretary of State Antony Blinken among alumni. “Now that Brexit is finalized, financial institutions have warned us that they intend to pursue their staff-relocation plans to Paris.”

Like Frankfurt and Amsterdam, Paris lobbied hard to attract banks after the 2016 Brexit referendum. Reforms unveiled by President Emmanuel Macron’s government to make hiring more attractive, a talent pool trained at elite engineering schools and the mix of infrastructure, culture and schools needed to lure high-flyers were rolled out. The European Banking Authority moved to Paris in 2019, ending its eight-year existence in London. Then bank jobs began trickling in.

Bank of America was among the first major foreign banks to announce plans to create a sales and trading base for Europe at its Paris office -- a commanding 120-year-old building that once served as a center for the French postal service La Poste. JPMorgan, with its headquarters in the city’s historic Place Vendome, bought an adjacent building in the nearby place du Marche Saint Honore for its continental trading hub. The new office was inaugurated this year by Macron in the presence of Chief Executive Officer Jamie Dimon, who spoke of his ambition to fill up the six trading floors.

The confluence of Brexit-related hires and a pickup in banking activities has sparked an all-out battle for talent. Investment bankers are seeing renewed appetite for M&A and ECM deals, and SPAC listings are surging in Europe. The number of completed deals on French targets jumped 18% in the first half from the year-earlier period, with transactions valued at almost $22 billion, Bloomberg data shows.

Hedge funds and boutique investment banks have also joined the fray. Citadel, which opened an office in the city last year, has hired professionals from HSBC Holdings Plc, Bank of America and Goldman Sachs. Others, like Qube Research & Technologies, are also recruiting, creating shortages of quantitative analysts and traders.

“In France, and in Paris in particular, competition has gotten tougher,” Societe Generale SA Chairman Lorenzo Bini Smaghi said in a Bloomberg TV interview. “There may be some competition and pressure on salaries going forward. This is a big challenge for our industry.”

Although French lenders haven’t unveiled across-the-board salary raises like their peers in New York, some have made selective gestures.  HSBC, SocGen and BNP Paribas SA have reached agreements with French unions on flexible long-term remote-work plans.

“Banks are sometimes handing special bonuses to employees they deem promising in order to retain them,” Michael Page’s Garnier said.

The headhunter recently placed someone living in Montpellier, a seven-hour drive from Paris, for a job at a finance firm in the capital. The employer was so keen on the candidate, it agreed that he would need to come to Paris just one day a week.

“This would not have been done before,” Garnier said.