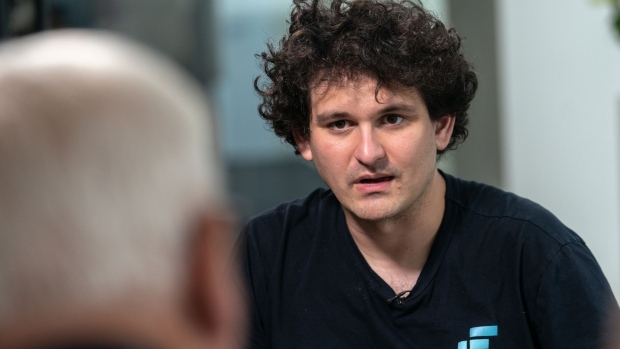 Sam Bankman-Fried, founder and chief executive officer of FTX Cryptocurrency Derivatives Exchange, speaks during an interview on an episode of Bloomberg Wealth with David Rubenstein in New York, US, on Wednesday, Aug 17, 2022. Crypto exchange FTX US is expanding its no-fee stock trading service to all US users, including non-crypto investors, in a move to expand its customer base and increase assets under custody. , Bloomberg

(Bloomberg) -- FTX founder Sam Bankman-Fried reiterated that he wasn’t aware of any improper transactions involving funds from the exchange and his Alameda Research trading business while his crypto empire collapsed.

“I did not know of any improper use of customer funds,” Bankman-Fried said in response to a question during a taped interview on Good Morning America.

The comments were the latest by Bankman-Fried from a series of interviews that disavow any improper action. He participated Wednesday at the New York Times DealBook Summit via a video link from the Bahamas.

The comments have shed little light on the question of where client funds ended up as Bankman-Fried stuck to a hard-to-parse account of how Alameda ran up a massive margin position on the exchange.

Bankman-Fried’s fortune at one point reached $26 billion, and just weeks ago he was described as the John Pierpont Morgan of digital assets, willing to use his wealth to bail out the industry. He said during the interview that he’s down to one credit card and $100,000 in the bank.

The restructuring expert who took over the firm in bankruptcy, John J. Ray III, has painted a picture of FTX as a mismanaged, largely out-of-control company bathed in conflicts and lacking basic accounting practices, calling it the worst failure of corporate controls he’d ever seen.

“I think I got a little cocky,” Bankman-Fried said during the Good Morning America interview.