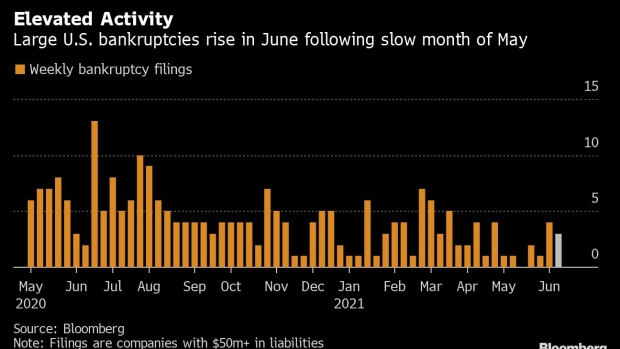 (Bloomberg) -- A resurgent U.S. economy and free-flowing credit market will likely keep a lid on bankruptcy activity for the rest of the year, according to restructuring lawyer Chris Greco of law firm Kirkland & Ellis.

Three large companies sought Chapter 11 bankruptcy in the U.S. last week, marking a second straight week with a relatively elevated number of filings. A fourth filed on Sunday. But several of those in recent weeks were “bespoke situations” that don’t suggest a broad pickup in restructuring activity for the rest of 2021, said Greco, whose firm represents three companies that sought court protection from creditors since last Sunday.

“We haven’t seen a substantial change” in the number of filings due to continued open “access to liquidity in the market,” Greco said in an interview. He said he expects to see continued strong economic activity over the near-term, with more “financing available in the capital markets” and a strong mergers and acquisitions market.

All told, 67 companies with at least $50 million of liabilities have filed for bankruptcy this year as of June 14, according to data compiled by Bloomberg. That’s well below the 108 that had sought court protection during the same period last year, but still above the ten-year average of about 62.

That total includes the long-awaited bankruptcy of Washington Prime Group, the mall-focused real estate investment trust that saw its debt plunge to distressed levels when the pandemic curbed in-person shopping. The REIT entered Chapter 11 with a restructuring support agreement in place that calls for a payout to shareholders.

Looking ahead, “there will be a handful of one-off situations -- with more bankruptcy filings to come” in 2021, “but not at nearly the same rate as last year,” Kirkland’s Greco said.

There were 188 distressed bonds from 106 issuers trading as of Monday, up from 184 and down from 111, respectively, one week earlier, according to Trace data.

Diamond Sports Group LLC had the most distressed debt of issuers that hadn’t filed for bankruptcy as of May 7, data compiled by Bloomberg show. Its parent company, Sinclair Broadcast Group Inc., said in a March filing that it expects Diamond to have enough cash for the next 12 months if the pandemic doesn’t get worse.