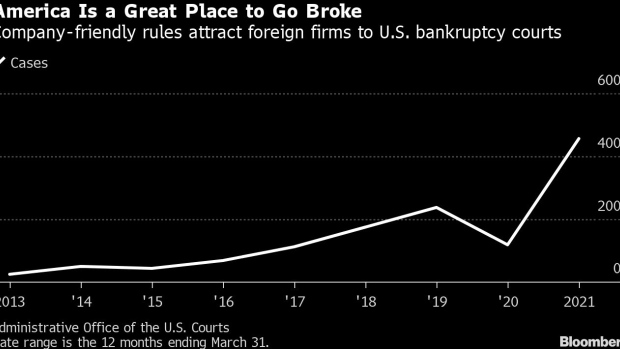 (Bloomberg) -- There’s still at least one thing Americans do better than anyone else in the world: Corporate bankruptcies.

Since 2013, hundreds of foreign businesses have taken advantage of U.S. bankruptcy courts to slash debt and clean up their balance sheets, according to an analysis of legal filings by Bloomberg News. The reason is simple, lawyers and former judges say: America has the most company-friendly bankruptcy rules in the developed world.

“The lawyers and judges know how to move things through the system quickly,” said Bruce Markell, a former U.S. bankruptcy judge who consults with the International Monetary Fund on insolvency issues and was the primary drafter of the bankruptcy law used by the country of Kosovo.

Latam Airlines, based in Chile, Aeromexico and Colombia’s Avianca Holdings all sought court protection in New York last year, blaming the drop in air travel caused by the coronavirus. They were joined by OneWeb Global, based in London, while two other satellite communications companies filed in different U.S. bankruptcy courts. Last month, Corp Group Banking SA filed for court protection in Wilmington, Delaware, in part to halt a bondholder lawsuit filed against the bank holding company in its hometown of Santiago, Chile.

At least a dozen big foreign corporations, including airlines, oil drillers and satellite companies, filed bankruptcy cases last year in the U.S., according to court records and a law school tally. That’s more than double the previous high mark in 2002 found in the Bankruptcy Research Database at the UCLA School of Law.

When smaller cases are counted, the numbers climb even higher. Nearly 1,300 Chapter 11 petitions were filed by hundreds of companies based outside the U.S. from March 2013 to March 2021, according to annual reports compiled by the Administrative Office of the U.S. Courts. The actual number of companies that seek Chapter 11 is lower than the number of petitions in the records because larger firms typically file a separate petition, or case, for each subsidiary.

Although some countries, including the U.K and Germany, are changing their bankruptcy laws to be more like America’s, the system in the U.S. is still the premier destination for the biggest, most complicated restructuring cases, said Markell, who is a bankruptcy professor at Northwestern Pritzker School of Law.

Critics say corporations flock to U.S. courts because the bankruptcy system favors companies and their management. Executives typically stay in charge and payments to all but essential creditors are halted during a Chapter 11. Any lawsuits against the company, and sometimes its officers, are also put on hold.

Some countries, including Canada and the U.K., typically install a court-supervised monitor when a company files an insolvency case. Other court systems are designed to liquidate instead of rehabilitate a company.

“The U.S. bankruptcy system offers the companies’ lawyers and managers — the people who pick the courts — the best deal,” wrote UCLA law professor Lynn LoPucki in his book “Courting Failure: How Competition for Big Cases Is Corrupting the Bankruptcy Courts.”

U.S. legal and financial advisers defend the system. Foreign corporations may worry that the courts back home can’t referee the complicated legal battles that arise in a multibillion-dollar reorganization, James L. Bromley, co-head of the global restructuring practice at Sullivan & Cromwell, said in an interview.

“The local jurisdictions do not have as robust systems that would allow a complex, international entity to reorganize,” Bromley said. “Most of the material creditors are connected to the U.S. in one way, shape or form.”

In the biggest restructuring cases, it’s routine for banks, bondholders and a company’s major suppliers to hire teams of lawyers and financial advisers to fight each other and the company over a limited pool of money. U.S. judges, especially in places like Manhattan, Texas and Delaware, have long track records of handling such cases.

U.S. courts may also serve the interests of creditors. Bond and loan documents are often written in English and governed by New York or Delaware law, Bromley said. That means when there is a dispute about such contracts, a judge makes a decision based on the laws of those states, he added.

“You can do things that you can’t do anywhere else,” Eric Snyder, chairman of the bankruptcy practice at law firm Wilk Auslander, said in an interview. “If you can satisfy jurisdictional requirements, you’d be crazy not to file in the United States.”

Brexit made the U.S. more attractive than the U.K. for some European-based companies, Bromley said. That’s because the break with Europe has caused uncertainty about how U.K. courts might rule.

But sometimes a company faces backlash at home. Mexican retailer Grupo Famsa filed bankruptcy in New York in June with plans backed by some creditors to restructure. Mexico’s banking regulator responded by revoking the license of its Banco Ahorro Famsa unit to protect more than 580,000 banking clients.