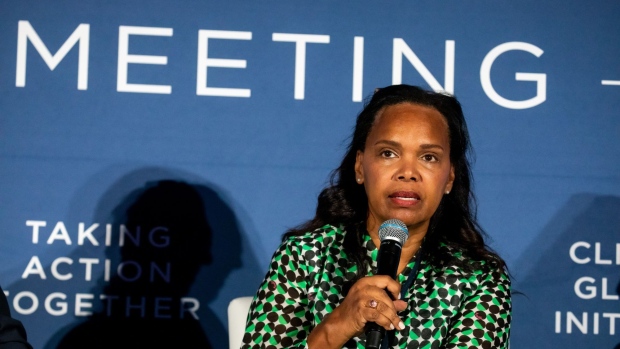 (Bloomberg) -- Banks are developing technology to identify potential mass shooters, according to a CEO backing the push to get credit-card companies to more closely track gun purchases.

“We’re at the very early stages of this -- this particular code just got approved in October, so those detection scenarios are still being brought together,” Brown said. “But as this is implemented, those scenarios will be used.”

The strategy would mirror ways banks try to identify and stop fraudsters from using customers’ funds.

The International Organization for Standardization approved a new merchant category code earlier this year that banks will use when processing transactions for gun and ammunition stores after Amalgamated submitted an application on the matter. Gun-control advocates were quick to celebrate the move, arguing it would help banks flag suspicious activity at these retailers.

While major payment networks have said they would adopt the new code, some have argued it won’t have its intended effect. Visa Inc., for example, has said it doesn’t have access to data showing the products consumers are actually buying. That means the network and its banking partners would have no idea if a gun-store customer is purchasing an automatic rifle or safety equipment.

Banks, too, have faced pressure from Congress over what they plan to do with the new codes. Some conservative policymakers have said they’re concerned lenders will use the data to create an unofficial list of firearm owners in the US, which certain government agencies are prohibited from doing.

Banks already file thousands of suspicious activity reports every year as they detect a litany of potential misdeeds by customers. The new codes should mean they treat the issue of tracking gun purchases no differently, Brown said.

“What I’m hearing from other banks is that they have been honoring this process and this system, filing Suspicious Activity Reports across a myriad of industries to stop a myriad of crimes -- or at least alert authorizes of them,” she said. “And I have every confidence that banks are going to do the same thing here.”