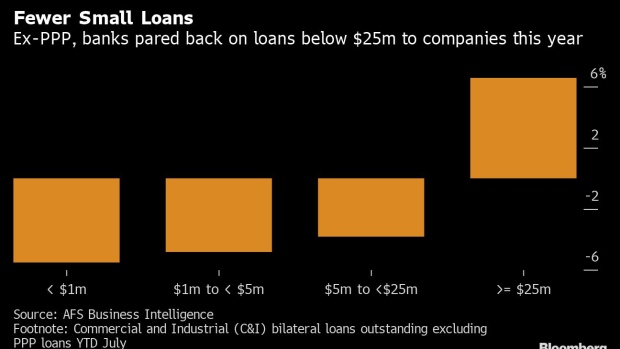 (Bloomberg) -- It was billed as a lifeline for America’s middle-market companies seeking cash to get through the pandemic. Yet more than two months since its launch, the Federal Reserve’s Main Street Lending Program isn’t living up to expectations as few banks are willing to provide the loans.

Some of the nation’s biggest lenders have demanded such crushing terms that discussions have stalled from the get-go, while other banks have decided not to participate at all. That’s meant the take-up for the $600 billion program is just 0.2%, threatening to undercut the economic recovery and efforts to protect jobs.

Data-analytics firm IDM is just one example of hundreds of midsize businesses affected by Covid-19 that have been left disappointed.

It was hoping to get a Fed-assisted loan to support payroll, refinance debt and potentially hire more employees. What the Reston, Virginia-based company found instead was banks in West Virginia and Georgia that weren’t taking part, while it wasn’t able to pursue a loan with JPMorgan Chase & Co. because the firm was asked to pledge real estate it doesn’t have.

“We can’t even get out of the box and submit an application,” said John Chung, chief operating officer at IDM, which has $30 million in annual revenue. “This whole thing is kind of a joke.”

Companies impacted by Covid and even those resilient to the outbreak have struggled to find banks willing to lend through the program. Cardinal Capital, a Baton Rouge, Louisiana-based commercial finance brokerage firm, has been looking to borrow about $300 million for various clients. But most of the 60 banks it approached won’t accept new borrowers, or work with new businesses backed by assets that fall outside the lender’s usual purview, the company’s partner Rob Powell said in an interview.

JPMorgan, meanwhile, has had discussions with about 2,000 of its clients about Main Street loans, only to receive applications from about 5% of them, according to a person familiar with the matter who isn’t authorized to speak publicly.

The Fed and Treasury Department started the program on July 6 with the aim of providing loans to companies either too small to access capital markets, or too big to get aid through the government’s Paycheck Protection Program.

Just $1.4 billion of Main Street loans were issued as of Sept. 10, with about $300 million more submitted or being processed, according to the Boston Fed which administers the program. In contrast, blue-chip companies have sold more than $1.2 trillion of corporate bonds since March to help weather the pandemic’s economic impact, and smaller outfits have benefited from hundreds of billions of dollars in potentially forgivable loans.

The government “essentially set up a program that didn’t do what the mandate was, which was to protect jobs, to get the funds readily available to businesses -- particularly businesses who were not able to benefit from the PPP,” said Tom Bohn, chief executive officer of the Association for Corporate Growth, which represents middle-market companies and their lenders.

Read more: Much of America is shut out of the greatest borrowing binge ever

What’s worrisome is that midsize companies employ about 48 million people and account for about a third of the gross domestic product in the private sector. A credit crunch for such firms could cause many to limp along or outright fail, undermining a post-pandemic recovery. Critics of the program have included U.S. Representative James Clyburn and Bharat Ramamurti, a member of the Congressional Oversight Commission for the CARES Act.

Among lender concerns in the program’s current state are capital charges they have to account for due to the requirement to hold 5% of the loans. Some also lack expertise after stepping back from lending to riskier middle-market companies after the last financial crisis a decade ago. And there are also questions around how potential bankruptcies would work, spooking would-be lenders fearful of facing off in court against the Fed, said Ellen Snare, a partner at King & Spalding LLP.

The Treasury itself has advised banks to avoid taking any credit risk -- a critical component of lending -- telling them to target zero losses, according to bankers interviewed by Bloomberg.

The Fed has already tweaked the program a few times, and regulators are looking at additional adjustments to address some of the issues. Some economists have suggested the Fed take on greater credit risk, with banks employed simply to process the loans. Other ideas put forth are offering government subsidies to lower the cost of borrowing, placing banks ahead of the government in bankruptcy workouts and shifting to more equity-like financings.

Still, only 575 lenders had said they’d participate by Sept. 4, and most of them have yet to hand out loans. One lender, City National Bank of Florida, accounts for 50% of disclosed loans, and 30% of the total amount borrowed, according to the Fed.

Treasury Secretary Steven Mnuchin said at a Sept. 1 Congressional hearing that loan issuance could grow to $25 billion to $50 billion, predicting a lot of volume in the next two months. That increase, even if it does happen, would still only represent 4% to 8% of the program’s maximum size. The Fed is likely to be asked about the program at its next meeting on Wednesday.

Treasury Department representatives declined to comment further, as did the Federal Reserve.

All told, access to credit for small and midsize companies may get worse. Already, large and regional banks are offering fewer loans of $25 million or less, according to AFS Business Intelligence, and a survey of senior lending officers indicates that lending conditions are tightening at the quickest pace since the financial crisis.

“I am not sure the verdict on Main Street is fully in yet,” said Jeremy Stein, chairman of the Harvard University economics department and a Fed governor from 2012 to 2014. “But I do think it will be a problem if the economy continues to suffer, corporate bankruptcies go up and the program still has little takeup.”