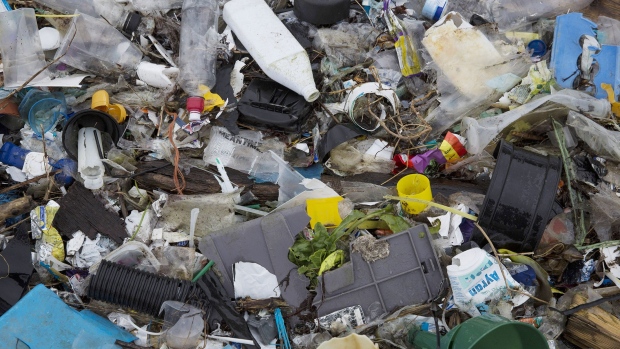 CLIFFE, KENT - JANUARY 02: Plastics and other detritus line the shore of the Thames Estuary on January 2, 2018 in Cliffe, Kent. Tons of plastic and other waste lines areas along the Thames Estuary shoreline, an important feeding ground for wading birds and other marine wildlife. According to the United Nations Environment Programme (UNEP), at current rates of pollution, there will likely be more plastic in the sea than fish by 2050. In December 2017 Britain joined the other 193 UN countries and signed up to a resolution to help eliminate marine litter and microplastics in the sea. It is estimated that about eight million metric tons of plastic find their way into the world's oceans every year. Once in the Ocean plastic can take hundreds of years to degrade, all the while breaking down into smaller and smaller 'microplastics,' which can be consumed by marine animals, and find their way into the human food chain. (Photo by Dan Kitwood/Getty Images) Photographer: Dan Kitwood/Getty Images Europe , Photographer: Dan Kitwood/Getty Images Europe

(Bloomberg) -- Banks are failing to address the global plastic-pollution crisis, having provided $1.7 trillion in financing to packaging companies, retailers and related businesses, according to a report.

The banks haven’t put in place due-diligence processes for packaging companies or made funding contingent on policies that reduces plastic and favors recycling over virgin plastics, Portfolio.earth, a group that tracks the finance industry’s impact on the environment, said in the report released Thursday. The financing period covered January 2015 to September 2019.

“This implies that banks are currently not taking any responsibility to understand, measure or reduce the impacts of their loans within the plastics value chain,” the group said. “By indiscriminately funding actors in the plastics supply chain, banks have failed to acknowledge their role in enabling global plastic pollution.”

About 11 million metric tons of plastic make their way into the oceans each year, causing damage to wildlife habitats and harming sea life. The annual flow of plastics into oceans is on a trajectory to triple over the next 20 years, which may add as much as 110 pounds of plastic trash for every meter of coastline worldwide, according to a July report by the Pew Charitable Trusts.

About 265 banks provided loans and underwriting to 40 companies in the plastic-packaging value chain, including the polymer and fast-moving consumer-goods industries, Portfolio.earth said. Bank of America Corp., Citigroup Inc. and JPMorgan Chase & Co. were among the top financiers, according to the report.

“Banks need to mitigate their role in enabling plastic pollution in a number of ways -- for example, by aligning their lending portfolios with public policy on plastic reduction, reusability and recycling, and ceasing the financing of new plants that use virgin feedstock to produce single-use plastic packaging,” said Robin Smale, a director at Vivid Economics, which audited Portfolio.earth’s report.

Portfolio.earth called on banks to make their financing of companies in the plastic-packaging supply chain contingent on them putting in place best practices. The group also said corporations should boost the reusability of plastic packaging products.

Portfolio.earth is made up of researchers including Mario Rautner, who has worked at Greenpeace and Global Canopy, and Liz Gallagher, who was previously at E3G, a climate-change think tank. Portfolio.earth said in October that the world’s 50 biggest banks are financing industries that are contributing the most to biodiversity loss.

Portfolio.Earth worked with Profundo, a Dutch nonprofit that analyzes business and financial impacts on sustainability, and Vivid Economics on the report.