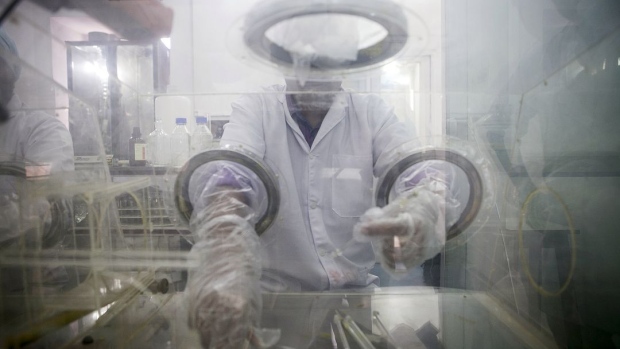 A research assistant prepares syringes inside a pharmacy glovebox at the reversible inhibition of sperm under guidance (RISUG) male contraceptive treatment research and development laboratory at Indian Institute of Technology (IIT) Kharagpur in Kharagpur, West Bengal, India, on Feb. 16, 2017. A new birth control method for men has the potential to win as much as half the $10 billion market for female contraceptives worldwide and cut into the $3.2 billion of annual condom sales, businesses dominated by pharmaceutical giants Bayer AG, Pfizer Inc. and Merck & Co., according to estimates from the last major drug company to explore the area. Photographer: Sumit Dayal/Bloomberg , Bloomberg

(Bloomberg) -- A judge rejected a lawsuit by investors who bought almost $1.8 billion worth of debt in what was once the nation’s largest drug-testing company shortly before it filed for bankruptcy.

Trustees for the investors sued JPMorgan Chase and Co. and the other banks that sold them the debt in 2014. The next year, Millennium Health LLC filed a bankruptcy petition, and the value of the debt plummeted.

In their lawsuit, the trustees accused the bank of violating federal security laws by failing to tell them about Millennium’s problems, including a Justice Department investigation of allegedly “flagrantly illegal” billing practices.

He described the investors as “highly sophisticated purchasers” who would not reasonably consider the loans to be securities “subject to the attendant regulations and protections.”

“Instead, it would have been reasonable for these sophisticated institutional buyers to believe that they were lending money, with all of the risks that may entail,” the judge wrote.

Among the investors were roughly 400 mutual funds and hedge funds.

The judge granted the trustees’ request to redraft their complaint and refile it.