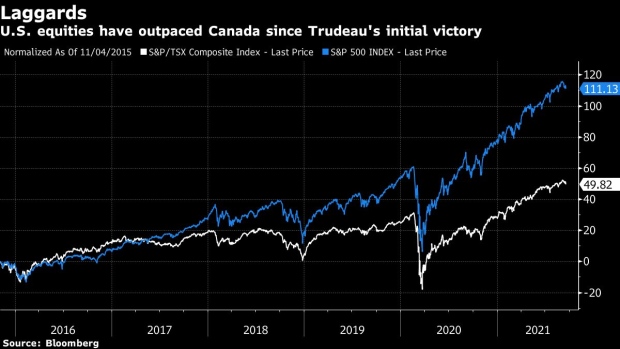 A person wearing a protective mask works inside a Bank of Montreal in the financial district of Toronto, Ontario, Canada, on Thursday, March 25, 2021. Premier Doug Ford said further lockdowns could happen as a government agency that tracks hospitalizations reported the biggest single-day jump in admissions of patients to intensive care since the pandemic began, CBC reports. Photographer: Galit Rodan/Bloomberg , Bloomberg

(Bloomberg) -- With Canadians set to vote Monday in a highly competitive election, the outlook for the two largest sectors in country’s stock index hangs in the balance.

Polls say the race is close. If Prime Minister Justin Trudeau wins, as now looks likely, he may follow through on a promise to increase taxes on the biggest banks and insurance companies and impose stricter emissions rules on oil and gas companies. Financial and energy stocks make up 44% of the benchmark S&P/TSX Composite Index.

If, however, Conservative leader Erin O’Toole pulls off an upset, it could potentially bring a relief rally to the two groups.

A return of Trudeau’s Liberals with a minority in the House of Commons could also help turn investors’ focus back to the pandemic and fiscal support from the government, according to David Rosenberg, chief economist and founder of Rosenberg Research & Associates Inc.

“The performance of bonds, equities and the loonie will likely be hitched to external factors including the trajectory of the pandemic, secular disinflationary trends and the global commodity trade,” Rosenberg told clients in a note.

The index has advanced 17.5% this year, with technology and energy leading the pack. Here’s a breakdown of sectors and stocks to watch:

Banks and insurance firms in the sights of a government that ran a C$314 billion deficit last year. and is looking for revenue. Trudeau’s Liberals pledged to hike the corporate income tax rate by 3 percentage points on profit over C$1 billion at financial institutions.

A bank tax hike “absolutely could limit the amount of M&A that Canadian banks do in the U.S.” or globally, said Lara Zink, chief executive officer of Women in Capital Markets. It’s money these firms would otherwise use to grow their U.S. businesses, she added.

Higher taxes could also prompt Canada’s banking giants to pass on the cost to borrowers through higher interest rates and service fees, according to Bloomberg Intelligence.

The three major national political parties “are essentially aligned on the transaction in that they would all like to preserve wireless competition and maintain the current market structure of four wireless operators across Canada,” Scotiabank analyst Jeff Fan told clients in a note.

No matter who wins, it’s likely Rogers will have to make concessions to get the deal across the finish line.

Deal aside, the Conservatives appear more inclined to shift policy to boost competition across the telecom sector, whether it be from regional or foreign firms, Canaccord Genuity analyst Aravinda Galappatthige said in a note, adding that this would “likely be viewed negatively” by investors. A Liberal government is the best-case scenario for BCE Inc., Rogers and Telus Corp., Galappatthige wrote.

Soaring real estate prices have been a big issue for voters and the major parties have all proposed fixes to help buyers. Multifamily real estate investment trusts may come into focus if the Liberals win, as they seek to review tax treatment of large corporate owners of residential properties and implement policies to curb excessive profits, according to Desjardins.

A Conservative victory could boost investor sentiment toward Canada’s oil & gas sector, where pipeline development has faced hurdles and carbon taxes are set to act as another headwind.

The Tories have promised a more gradual approach to reducing carbon emissions and are more pro-pipeline. Trudeau’s Liberals have pledged to force oil and gas companies to set five-year targets to cut their emissions, with the aim of reaching net zero by 2050.

A Liberal government, meanwhile, would be a minor positive for utilities and renewable power companies, according to Scotiabank.

The next government is expected to negotiate with various indigenous groups on the sale of the Trans Mountain oil sands pipeline, which the government purchased from Kinder Morgan Inc. for C$4.5 billion in 2018.

“We would expect that the M&A market will be vibrant regardless of the outcome,” said Sean Stevens, partner and co-lead of the securities and M&A group at law firm Fasken Martineau DuMoulin LLP

The Conservatives may be more M&A friendly, though there’s no real risk to current deal-making trends in this election, according to Julian Klymochko, chief investment officer of Accelerate Financial Technologies Inc. The Rogers-Shaw deal had potential to become a “political football,” but appears to have dodged any bearish scenarios so far, he added.