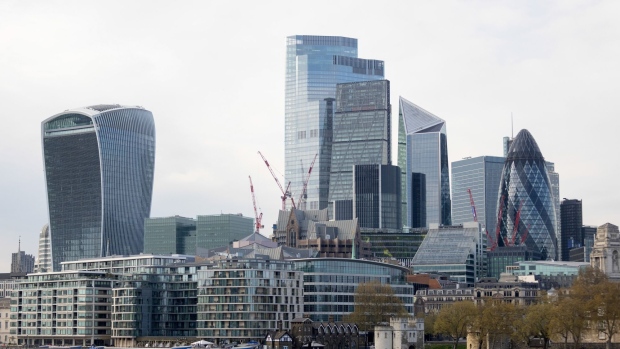 Skyscrapers and buildings including 30 St. Marys Axe, also known as The Gherkin, on the City of London skyline, U.K., on Tuesday, April 27, 2021. In a financial hub that draws more international capital than any other, the fate of the older buildings could hit the fortunes of some of the world’s biggest real-estate investors, from China Investment Corp. to Norway's sovereign wealth fund and Malaysia's biggest pension fund. Photographer: Jason Alden/Bloomberg , Bloomberg

(Bloomberg) -- British regulators warned the bosses of the biggest U.K. banks they aren’t doing enough to weed out potential fraud and crime when offering trade finance.

“During the past 18 months there have been several high-profile failures of commodity and trade finance firms with significant financial loss,” the Prudential Regulation Authority and Financial Conduct Authority said in a letter dated Sept. 9. “Our recent assessments of individual firms have highlighted several significant issues relating to both credit risk analysis and financial crime controls.”

Banks that offer trade finance should be making checks for money laundering, sanctions evasion, terrorist financing and fraud, the regulators said. Lenders are also not doing enough to spot when a loan might be funding “dual-use” goods, which can be used for both civilian and military purposes, they said.

The comments come months after the collapse of Greensill Capital, which provided trade finance to companies and then sold the loans to investment funds. Its failure prompted global scrutiny of its relationship with steel magnate Sanjeev Gupta and helped trigger a shakeup at Credit Suisse Group AG, which had to freeze a $10 billion group of funds that invested in assets sourced by Greensill.

The British regulators said banks were still making loans based on risk assessments that were “too generic to cover the different types of risk exposures that may exist in trade finance client relationships.” Lenders should be looking for red flags at the end buyer of the commodity, credit insurers and other parties, they said.