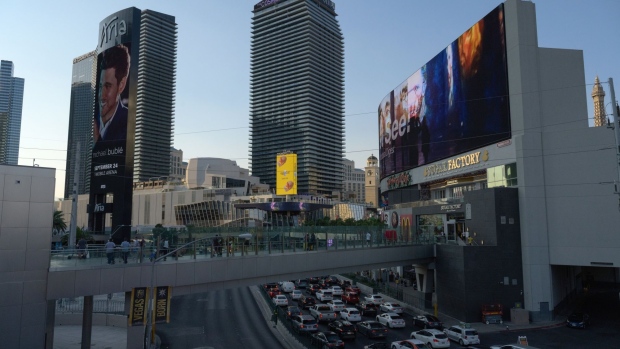 (Bloomberg) -- The banks marketing a roughly $3 billion commercial mortgage bond offering tied to The Cosmopolitan of Las Vegas have sweetened the terms of the deal in an effort to lock in investors and pricing.

The transaction, touted as the biggest US commercial mortgage backed security deal for 2022, was expected to price earlier this week. But rampant market volatility, the large size of the offering and concerns over rising rates all meant that the bank club had to postpone pricing until Friday.

Chunks of the debt had already been sold yesterday across all six tranches at wider levels than originally marketed, according to people with knowledge of the matter.

Spreads on the securities, which are backed by the hotel’s commercial real estate, flexed up by more than 20 basis points between official guidance on May 20 and today’s launch across all tranches, except for the A and B. The C tranche saw spreads move from 375 bps to 400 bps, according to sources. That tranche had already widened by 75 bps between revised initial price thoughts on May 13 and guidance on May 20.

Representatives for the banks, namely Citigroup Inc., JPMorgan Chase & Co., Goldman Sachs Inc. and Morgan Stanley declined to comment, while BofA Securities did not respond to an inquiry by press time. Spokespeople for the sponsors -- Blackstone Inc. and Stonepeak Partners -- also declined to comment.

Two of the property’s new owners, Blackstone Real Estate Income Trust and Stonepeak, began marketing the notes in mid-May to help fund their acquisition. A third owner, the Cherng Family Trust (the family office of the founders of the Panda Express restaurant chain), was not listed as an issuer.

The nature of the real estate backing the bonds -- the 3,032-room resort and casino itself -- has weighed on the minds of some investors, said Chris Sullivan, chief investment officer at United Nations Federal Credit Union, in an interview.

“No question that it is a premier property on the strip and has benefited tremendously from the re-opening leisure trade over the last year or so, but uncertainties remain both from the resurgence of the virus in some areas as well as the durability of consumer spending power,” he said.

More than half of The Cosmopolitan’s revenue comes “from more volatile, non-room revenue departments,” such as gambling and food and beverage, according to a Moody’s Investors Service pre-sale note. The ratings agency assigned provisional investment grade scores to $2.1 billion of the notes on May 20, factoring in risks such as the potential impact of the pandemic on the property’s ability to service its debt.

BREIT, Stonepeak and Cherng bought the property in May, after announcing a deal to acquire it from Blackstone’s Real Estate Partners VII fund in September. The trio also inked a 30-year sale-leaseback with MGM Resorts International, which agreed to acquire the operations of The Cosmopolitan for $1.6 billion and pay the owners $200 million a year in rent.