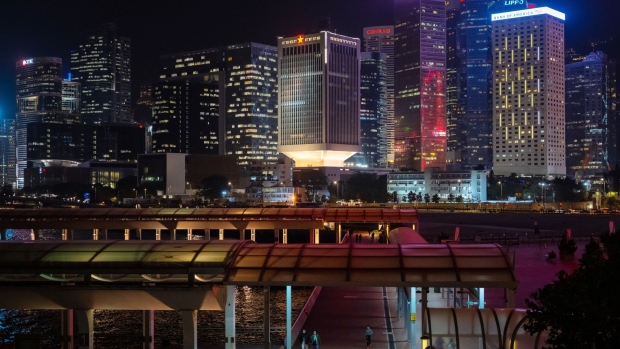 Pedestrians wearing protective masks walk along the promenade at night in Hong Kong, China, on Wednesday, June 30, 2021. The national security law China imposed on Hong Kong a year ago today was much more than a piece of legislation: It showed Beijing was now running the show in the former British colony. Photographer: Lam Yik/Bloomberg , Bloomberg

Standard Chartered Plc Chief Executive Officer Bill Winters was the latest executive in recent weeks to signal a sweeping Chinese government crackdown and rising geopolitical tensions between China and the U.S. won’t derail his lender’s focus and investment in the region.

“We don’t see a structural or fundamental change in terms of the business opportunities for Standard Chartered,” Winters said on a call with reporters Tuesday. Hong Kong’s continuing role as a conduit into the Greater Bay Area mean “the opportunities for us in corporate banking and wealth management will be very, very substantial.”

His comments echo that of other firms such as Citigroup Inc., HSBC Holdings Plc and Credit Suisse Group AG, who all used earnings to underline it’s business as usual in Greater China. That comes despite a wide-ranging crackdown by Beijing on industries from its booming education industry to the technology sector last month as Xi Jinping’s Communist Party tightens its grip on the world’s second-largest economy.

The U.S. Securities and Exchange Commission has halted initial public offerings of Chinese companies in response.

The regulatory push is taking its toll on markets, with Hong Kong’s benchmark stock index sliding 15% from a high in February. Chinese technology giant Alibaba Group Holding Ltd. missed sales estimates for the first time in more than two years in the three months ended in June.

International banks have long been bullish on Greater China. Hong Kong has provided growth to international banks as some revenue from their home countries were shaken by the pandemic, while China is viewed by firms as a lucrative area for growth in wealth management.

It’s easy to see why. At Standard Chartered, Asia was the bank’s strongest region in the second quarter, with profit up 75% to $1.01 billion, countering declines in Europe and the Americas. HSBC, which is moving several of its most senior executives to Asia, said Monday that risk-weighted assets in the region increased by 6% from the start of the year

Citigroup’s chief financial officer, Mark Mason, said last week that China’s recent moves to crack down on companies isn’t likely to harm the bank’s business across the Asia-Pacific region. Credit Suisse CEO Thomas Gottstein said that while recent events contribute to “a less predictable short-term situation,” the firm sees “very strong and robust economic development not only in China, but in Asia, that we consider to be very attractive for our business models.”

China’s clampdown has even boosted business in the region. HSBC said Monday that the local capital markets had been given a boost by a shift in business from the U.S.

The bank said about a quarter of a $35 billion year-on-year increase in customer lending at its wealth and personal banking unit related to short-term loans in Hong Kong was linked to initial public offerings, where clients borrow money to fund their purchase of shares in the latest listings.