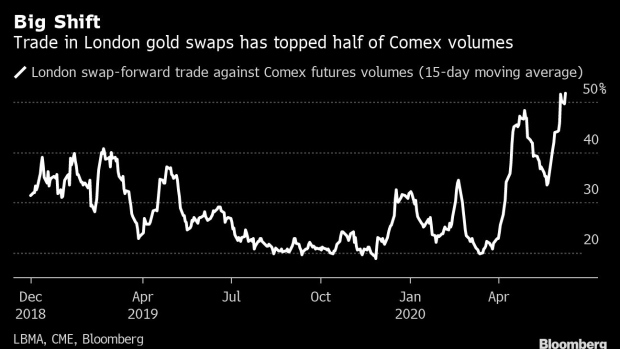 Gold bars sit in a vault at the Perth Mint Refinery, operated by Gold Corp., in Perth, Australia, on Thursday, Aug. 9, 2018. Demand for coins and minted bars was a little sluggish over the past year as Donald Trump's earlier win in the presidential poll prompted investors to divert funds into stocks, bonds and property, said Perth Mint's Chief Executive Officer Richard Hayes on Aug. 8. Photographer: Bloomberg/Bloomberg , Photographer: Bloomberg/Bloomberg

(Bloomberg) -- An extreme dislocation in the global gold market earlier this year spurred banks to shift some positions out of New York futures and into the London over-the-counter market, according to a leading figure in the industry.

The gold market, which is dominated by big banks like JPMorgan Chase & Co., HSBC Holdings Plc, and UBS Group AG, was upended in late March as lockdowns grounded planes and closed refineries, leading traders to worry they wouldn’t be able to get gold to New York in time to deliver against futures contracts. That caused futures, which typically trade in lockstep with the London spot price, to soar to a premium of as much as $70 an ounce.

The dislocation inflicted painful losses on banks, which typically sell futures in New York as a hedge for their positions in the London OTC market. HSBC, for example, suffered mark-to-market losses of close to $200 million in one day, according to a regulatory filing.

“The scale of the dislocation has really made everyone ask questions in terms of the ongoing approach of hedging long London, short Comex,” Crowell said in a phone interview. “Certainly in the short to medium future, it’s not an even hedge. So they’re having to either go OTC, or they’re reducing their trading appetite.”

The London market, which the LBMA represents, has historically been the main hub for trading in spot gold. But volumes of swaps and forwards, which traders can use as a hedging mechanism instead of Comex futures, have increased recently, according to LBMA data. While the volumes remain below those in the futures market, they have risen to the highest relative level in records going back to November 2018.

Crowell pointed to a day of record trading volume in the London market on May 26 -- when 67 million ounces of gold, worth $115 billion, changed hands -- as evidence of some traders shifting positions into the London market.

If it is sustained, the shift risks undermining the popularity of the gold contract on New York’s Comex, which is owned by CME Group Inc. and is the world’s leading venue for trading precious-metals futures and options.

The gold contract is performing “as designed,” a spokesman for CME said by email. “We continue to work with market participants to evolve our offerings and continue to ensure our products deliver the most liquid, cost effective and transparent risk management tools.”

The U.S. exchange responded to the turbulence in March by launching a new contract that allows delivery of 400-ounce bars, the form traded in London, as well as the 100-ounce and kilobars allowed under the main futures contract. But the new contract has barely traded.

Crowell said that market participants were discussing issues with the Comex including allowing delivery of gold in London, and she expected there could be an announcement from the U.S. exchange in the next month or so.

In the meantime, the LBMA is exploring ways to make the London market more efficient following the dislocation, she said. That could include reviewing price discovery for the spot price, which until now has often been derived from Comex.

The London Metal Exchange launched contracts for spot gold three years ago in a bid to take a slice of the world’s top OTC market and provide an alternative to Comex. But the bourse’s volumes are still just a fraction of the New York trade.