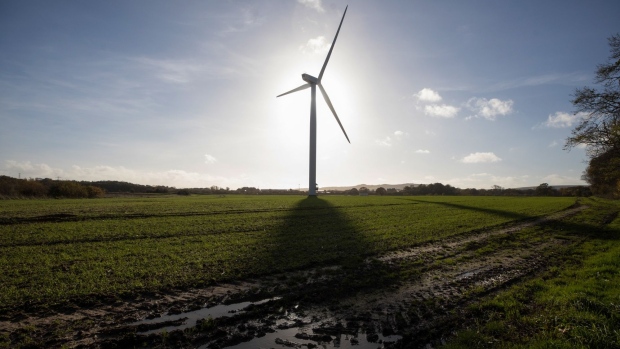 An onshore wind turbine on the Shepham Wind Farm near Pevensey, U.K., on Thursday, Nov. 12, 2020. Brexit talks are going down to the wire, and the European Union's chief negotiator Michel Barnier is threatening British access to the continent's single energy market as a way of extracting concessions on fishing rights. Photographer: Chris Ratcliffe/Bloomberg , Bloomberg

(Bloomberg) -- Financial institutions in Norway are being offered help from the government to measure the climate risk in investment portfolios.

“The finance industry has a key role in steering investments in the right direction,” Climate Minister Sveinung Rotevatn said in a statement on Wednesday. “Good assessments of climate risks are important for both the private and public sector.”

Exposure to climate risk is increasingly being used by investors and bank customers as a factor in deciding where to put their money. Failure to cut back on emissions risks alienating stakeholders, as the real-world fallout from global warming becomes increasingly apparent.

Norway is working with the non-profit think tank, 2° Investing Initiative, which developed the tool being offered to the financial industry. Called PACTA, it’s designed to measure climate risks based on the Paris Agreement, according to a statement. Norway’s financial institutions will be able to access it for free, and the results will be anonymous.

2° Investing Initiative says its tool allows companies to align portfolios with different climate scenarios and to analyze specific companies. More than 1,500 financial institutions have used it since a version for banks was introduced in September, according to its website.

Norway’s Financial Supervisory Authority said the test is a positive step that companies can take to integrate climate change and the transition to a low-carbon economy into their risk management systems. Authorities will hold meetings later this month with the industry on how to implement the tool.