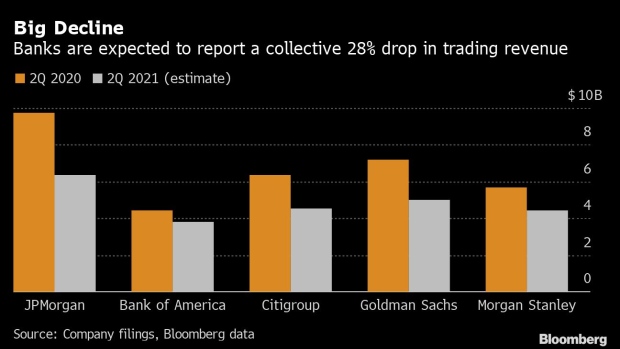 (Bloomberg) -- In the upside-down world of global banking, getting back to normal is bad news for the bottom line.

Wall Street churned out massive windfalls during the pandemic, but the economic reopening made possible by widespread vaccinations means this year’s earnings will look weaker by comparison. The big down arrow will be trading revenue, which is expected to show a 28% tumble for the top U.S. investment banks when they begin reporting second-quarter results next week, according to analysts’ estimates.

Trading isn’t the only soft spot. Loan growth is still proving elusive as consumers and companies, still flush with cash from trillions of dollars of government stimulus, have yet to demand more bank financing. Total loans for the commercial banks probably fell a combined 3% in the quarter, analysts predict.

All told, the six largest U.S. banks will probably say their combined revenue fell about 5% from a year earlier, according to analysts surveyed by Bloomberg. JPMorgan Chase & Co. and Goldman Sachs Group Inc. are up first, with both set to report results on Tuesday, followed by Bank of America Corp., Citigroup Inc. and Wells Fargo & Co. on Wednesday and Morgan Stanley on Thursday.

Mike Mayo, an analyst at Wells Fargo, said the industry’s second-quarter results will be a kind of “intermission” in a multi-act saga. “Act one was fantastic, and you’ll still see benefits from credit and capital markets but to a lesser degree,” Mayo said in an interview. “Act two waits to begin with improving loan growth, and then act three is the multi-year story of technology-induced efficiency improvement.”

Within investment banking, a record first half for mergers and acquisitions is poised to soften the blow with a surge in dealmaking fees, which analysts predict could rise 30% for the industry. But that alone likely won’t be enough to offset last quarter’s more muted overall results, especially for bond underwriting, with total investment-banking revenue expected to be down from a year earlier at the majority of firms.

“M&A is the only capital-markets line that looks poised to accelerate, but that isn’t big enough to offset these other trends,” Betsy Graseck, an analyst at Morgan Stanley, wrote in a note to clients. “We are not chasing IB revenues at this stage of the recovery.”

Another bright spot -- albeit a temporary one -- is more reserve releases. The biggest U.S. banks set aside tens of billions of dollars for potentially soured loans last year as the coronavirus pandemic bit into the economy. But most of those losses never materialized. That happy surprise provided a total boost of almost $14 billion to JPMorgan, Bank of America, Citigroup and Wells Fargo last quarter, and those firms could announce an additional $8 billion in reserve releases next week, according to Richard Ramsden, an analyst at Goldman Sachs.

Executives’ guidance on earnings conference calls next week should offer more clarity on where firms expect the business to head in coming months.

“Expect many questions on the pace and pockets of loan demand, utilization and growth,” Mayo at Wells Fargo said.

They may also face a grilling on their China operations after the country’s move this week to crack down on the flood of listings overseas.