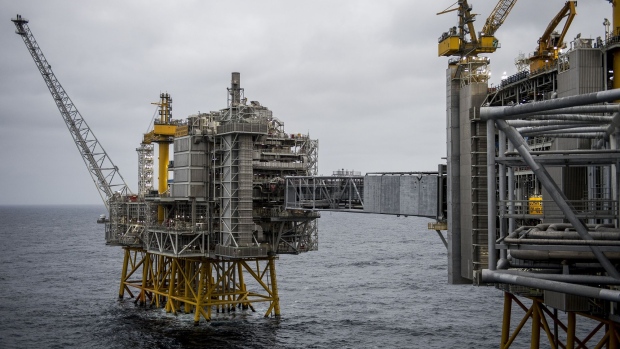 The riser platform stands on the Johan Sverdrup oil field off the coast of Norway in the North Sea, on Tuesday, Dec. 3, 2019. Sverdrup's earlier-than-expected start in October broke a long trend of underperformance for Norway's overall oil production. Photographer: Carina Johansen/Bloomberg , Bloomberg

(Bloomberg) -- Almost five years after countries signed the landmark Paris Agreement on climate change, financial institutions are still providing billions of dollars to companies extracting and burning the earth’s most-polluting resources.Since the start of 2016, banks extended more than $1.6 trillion of loans and underwriting services to fossil-fuel companies planning and developing oil, gas and coal projects, according to a joint report by 18 climate organizations published on Thursday. The top three — Citigroup Inc., Bank of America Corp. and JPMorgan Chase & Co. — lent and underwrote a combined $295 billion.The findings are based on the banks and investors linked to companies involved in 12 energy projects, so they underestimate the global scale of the funding for fossil fuels. The total amount is closer to $3.7 trillion when including all types of corporate emitters, data compiled by Bloomberg show.Together, the 12 projects spotlighted in the report have the potential to produce at least 175 gigatons of additional CO2 emissions, according to the report, which was coordinated by German climate group Urgewald. That’s almost 75% of the remaining carbon budget, which is required to limit global warming to 1.5 degrees Celcius, according to researchers at Climate Analytics.“Instead of adopting a rigorous approach that would prevent the expansion of fossil fuels and facilitate their phase-out, global banks are refusing to break with the fatal growth trend of fossil extraction,” said Lucie Pinson, executive director of Reclaim Finance, a Paris-based advocacy group that contributed to the report.

U.S. banks led the funding of domestic projects such as the oil drilling and fracking in the Permian Basin, which covers parts of Texas and New Mexico. Bank of America lent more than $54 billion to companies involved in the basin during the past five years, the research shows. In China, the Industrial and Commercial Bank of China has plowed more than $14 billion into the country’s coal industry.Fossil fuels also are receiving interest from fund managers. As of August, Vanguard Group held more than $65 billion worth of shares and bonds of companies linked to projects in the Permian Basin. BlackRock Inc., the world’s largest asset manager, held about $110 billion in bonds and shares of companies involved in the projects featured in the report. In January, BlackRock said it would cut its exposure to thermal coal as part of Chief Executive Officer Larry Fink’s sustainability strategy.Public bodies aren’t perfect, either. The World Bank Group has provided more than $12 billion of loans, guarantees, equity investment and technical assistance to fossil-fuel projects since the Paris agreement, according to the report. For example, the World Bank is providing $80 million in Mozambique for technical assistance to help develop oil and gas fields, including funds which went to a law firm acting on behalf of Exxon Mobil Corp. in 2018.“In 2020 we started to see the first major banks come out with commitments to reduce their overall financed emissions to net zero by 2050,” said Paddy McCully, climate and energy director at the Rainforest Action Network, who helped write the report. “But these will mean little if we don’t start seeing the banks back away right now from these fossil fuel expansion mega projects which may lock in decades of emissions.”