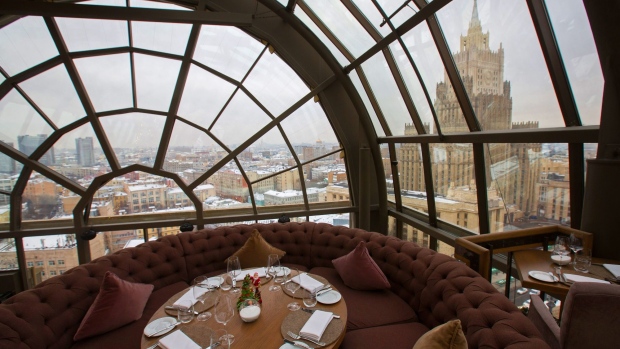 The view from the White Rabbit restaurant shows the city skyline and one of the Seven Sisters skyscrapers in Moscow, Russia, on Tuesday, Dec. 4, 2018. A handful of Russian chefs are starting to gain international attention, and Moscow is now home to a couple of destination restaurants. Photographer: Andrey Rudakov/Bloomberg , Bloomberg

The move took place in recent days after guidelines from the US Treasury that allowed US holders to wind down their positions, the news agency said, citing client notes, other communications from six banks as well as interviews.

The US Treasury stepped up financial sanctions on Russia by barring investors from buying the country’s debt in the secondary market in June. That means US firms can hold or sell Russian debt, but can’t purchase it, according to a spokesperson for Treasury’s Office of Foreign Assets Control then. The rules apply to corporate and sovereign debt as well as equities.

In July, the US Treasury said it will authorize an auction in credit default swaps sold on Russian bonds after banning trading in the nation’s securities on the secondary market. It also issued a general license authorizing transactions through Oct. 20 aimed at winding up Russian debt or equity trades that were made to June 6.

Bank of America, Barclays, Citi and JPMorgan declined to comment, according to the Reuters article. A spokesperson for Jefferies said the firm was “working within global sanctions guidelines” to facilitate clients’ needs in a complicated situation.

Deutsche Bank is trading bonds for clients on a request-only and case-by-case basis to reduce its Russia risk exposure or that of its non-US clients, Reuters reported, citing a source close to the bank. It isn’t taking any new business outside of these two categories.