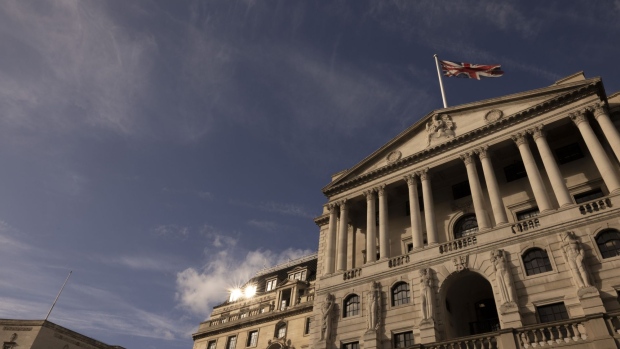 The facade of the Bank of England (BOE) in the City of London, UK, on Monday, Oct. 17, 2022. The Bank of England said it was restarting its corporate bond-selling as it looks to return to normality in the wake of a sustained selloff in UK assets. Photographer: Jason Alden/Bloomberg , Bloomberg

(Bloomberg) -- Money markets are pushing back on calls to change the interest banks get for parking cash at the Bank of England, warning that could hinder the central bank’s efforts to tackle inflation.

Two former BOE officials in recent weeks have said the UK government should consider reducing the interest paid on some deposits held by commercial lenders at the BOE. That could help fill a hole in public finances at a time when the government is hiking taxes and cutting spending, they argued.

The BOE currently pays interest on around £850 billion ($1 trillion) of deposits at its key rate, which has surged to 3% from just 0.1% a year ago. Tiering the rate would see a portion of those reserves remunerated at a lower level.

Members of the BOE’s Money Market Committee, which includes banks and asset managers, were in “wide agreement” that tiered remuneration would be a “negative outcome” for transmitting monetary policy, according to minutes of its November meeting published Thursday.

The committee said introducing tiering would instead drive up demand for short-dated UK government bonds, which could lower yields and prevent the BOE’s hikes in borrowing costs from passing through the financial system. Its members include Barclays Plc, Lloyds Banking Group Plc, Goldman Sachs Group Inc. and BlackRock Inc.

The BOE’s chief economist Huw Pill echoed their sentiment in a speech on Thursday, dismissing calls including from two former BOE deputy governors Paul Tucker and Charlie Bean to look at raising tens of billions of pounds by changing this system of interest on deposits.

There have already been signs that a lack of short-term gilts can hurt the transmission of monetary policy. This collateral scarcity meant repo rates at one point lagged the move higher in the BOE’s key rate.

Traders are paying a higher premium to buy these bonds, with the spread between five-year gilt yields versus the equivalent swap rate at over 100 basis points, about five times higher than than the five-year average.

The European Central Bank scrapped tiering on reserves once its key interest rate moved into positive territory this year. The Swiss National Bank has implemented a tiering system alongside liquidity absorbing-measures such as reverse repos and the issuance of SNB bills.