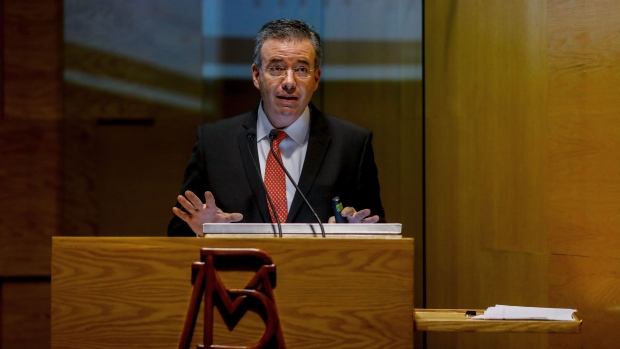 Alejandro Diaz de Leon, governor of the Bank of Mexico, speaks during a press conference on the quarterly inflation report in Mexico City, Mexico, on Wednesday, Nov. 28, 2018. Diaz de Leon said that that Banxico board is alert to increasing CPI risk. , Bloomberg

(Bloomberg) -- Mexico’s major banks on Friday told the country’s central bank they would support its efforts to fight a proposal in the Senate that would force the Banco de Mexico to buy cash that policymakers fear may be tainted with drug proceeds, people familiar with the talks said.

Central bank Governor Alejandro Diaz de Leon spoke with top executives from banks including BBVA Mexico, Citibanamex and Santander in a private virtual meeting about the unexpected bill, the people said. The central bank, known as Banxico, and lenders in the meeting didn’t immediately respond to electronic requests for comment on Sunday.

The legislation would force Banxico to buy up foreign currency from local banks if they can’t find another bank to take them.

Fewer and fewer major banks want to handle U.S. cash deposits due to strict anti-money laundering regulations and limits on deposits from people and companies. Once banks end up with big vaults of dollar deposits, they can no longer find institutions prepared to buy them back. The number of U.S. banks willing to take bulk cash shipments withered during the last decade in the wake of money laundering scandals at HSBC and Wachovia. It’s not much of a problem for global banks operating in Mexico, but it crimps business for local lenders.

Ricardo Monreal, the Senate leader of President Andres Manuel Lopez Obrador’s Morena party, introduced the bill late last month. The Morena senator who leads the finance committee, Alejandro Armenta, said lawmakers would incorporate input from the central bank, but he said the bill would probably get a vote this week in the Senate, where Morena has a majority with its allies, and then head to the lower house.

At Friday’s meeting, representatives of the country’s bank association ABM discussed putting out a press release supporting Banxico’s stance. So far, the group has remained silent on the bill and a representative didn’t immediately respond to a request for comment.

Diaz de Leon said in a Nov. 25 webcast that the central bank itself could risk facing sanctions for handling dollars of dubious origin. The bill could impede global banks with strict anti-money laundering rules from transacting with the central bank, one of the people who attended the meeting said.

Read More: Banxico Frets Over Senate Bid to Force It to Buy Dollars (1)

Central bank officials don’t see a way for the current bill to be modified and they discussed alternatives with bankers on Friday, including using development banks controlled by the finance ministry as dollar buyers of last resort, the people said.

Morena senators argue the reform is needed to help make sure migrants don’t have to sell dollars to small currency brokers at a loss. Mexico is on track to receive more than $40 billion in remittances this year. But most of that is wired home and cash amounts to less than 1%, central bank data shows.

U.S. officials have said they think much the physical dollars in Mexico are smuggled back from drug sales. Tourists and border economies bring in some as well.