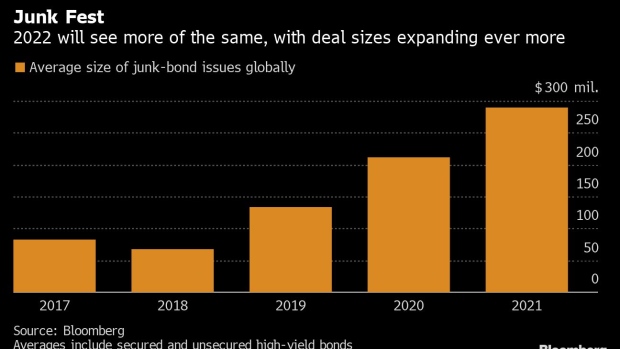 Buildings in lower Manhattan in New York, U.S., on Thursday June 17, 2021. New York state's pandemic mandates were lifted last week, after 70% of the adult population has now been given at least one dose of a coronavirus vaccine. Photographer: Victor J. Blue/Bloomberg , Bloomberg

(Bloomberg) -- Investment banks are readying more than $100 billion in massive debt packages to arm private equity with historic firepower in the battle for global acquisitions.

Unfazed by central bankers signaling moves to unwind pandemic stimulus, lenders in the U.S. and Europe are getting ever-more aggressive in their underwriting ambitions for blockbuster deals -- while testing the limits of market liquidity.

The pipeline includes up to 25 billion pound ($34 billion) financing for GlaxoSmithKline Plc’s consumer healthcare business for potentially one of the largest-ever buyouts. Other notable targets include famous British retail names from Boots drugstore chain to Marks & Spencer Group Plc.

“I think we are at the point in the cycle when you can do extremely large transactions,” said Daniel Schlumberger, JPMorgan Chase & Co.’s co-head of EMEA leveraged finance capital markets. “The amount of debt capital globally has put a lot more companies in the hunting ground.”

Ever-deepening credit markets have helped fuel a fertile environment for mergers and acquisitions, giving buyers the confidence to bid on assets across industries. There is more supply too, as corporates and private equity firms refocus business models in the pandemic aftermath -- creating opportunities for secondary buyouts, public-to-privates and spin-offs. Both M&A volumes and deal sizes could hit records in 2022.

The more than $100 billion in debt offerings derives from Bloomberg News reports on both launched and upcoming deals in the U.S. and Europe.

Expected transactions include a massive financing package to back a potential buyout of software maker Citrix Systems Inc., a $10 billion financing to support the leveraged takeover of cybersecurity software maker McAfee Corp., and around $5.5 billion to back 3G Capital’s acquisition of a controlling stake in Hunter Douglas.

All that means underwriters are set to test the absorption capacity of credit markets. While lenders seem confident the depth of liquidity in the leveraged loan and high yield bond market will enable investors to swallow these deals, the buyside could struggle with time capacity constraints, given the amount of work each deals needs to be assessed and processed.

Some investment banks are readying around $25 billion to $35 billion across leveraged loans and high yield bonds, with borrowers increasingly global in their outlook and flexible over the credit products on offer.

“We will see more cross-border activity,” said Nishan Srinivasan, global co-head of leveraged finance origination at Credit Suisse Group AG, at a recent media roundtable. “Companies get bigger and need more money and as much as the European market is incredibly strong, the reality is that the U.S. is a lot larger.”

The European leveraged loan market has around 7 billion to 10 billion pounds available across sterling and euros, while the dollar market -- the world’s deepest -- boasts unrivaled financing power. But the private-capital boom alongside the rise of subordinated debt funds are also helping Europe’s leverage cycle to mature.

“Capacity has grown sharply, and in the distributed capital markets raising €25 billion to €30 billion is achievable across dollars and euros,” said Ben Thompson, JPMorgan’s co-head of EMEA leveraged finance capital markets. “If you want more bespoke capital, there is a lot more private capital that can go to work.”

Yet jumbo event-driven financings are set to land at around the same time -- testing market liquidity.

A 6.6 billion-pound financing backing Clayton, Dubilier & Rice’s buyout of Wm Morrison Supermarkets Ltd is slated to launch for general syndication at the end of January in what would be the largest leveraged buyout of a British company in more than a decade.

Also in the U.K., banks are looking at a potential buyout of the Walgreens’-owned Boots pharmacy chain. Such a deal would require debt totaling around 3.5 billion to 4 billion pounds, while the acquisition of high-end grocer Marks & Spencer would need around 5 billion to 7 billion pounds.

“Market players boast a full war chest on each of the debt and equity sides -- they are willing to entertain an array of deals including jumbo ones,” said Jeremy Duffy, a London-based finance partner at law firm White & Case. “It wouldn’t be surprising if a new record for aggregate debt raise was set this year.”

Other deals include a $9.25 billion package for the buyout of health information technology company Athenahealth Group Inc. by Hellman & Friedman LLC and Bain Capital, a 3 billion euro ($3.4 billion) package for the takeover of Intertrust by CSC, and a 2.6 billion euro transaction for CVC’s buyout of Unilever tea.