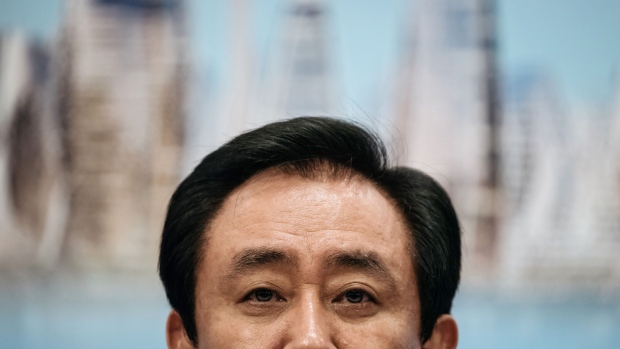 (Bloomberg) -- HSBC Holdings Plc and Bank of China Ltd.’s Hong Kong unit are reconsidering their decisions to halt mortgages for China Evergrande Group’s unfinished residential properties in Hong Kong, after the city’s de facto central bank questioned the moves, according to people familiar with the matter.

The Hong Kong Monetary Authority on Thursday asked some banks to explain the situation, questioning whether staff and homebuyers had been told that new loans for two of Evergrande’s under-construction projects were being suspended, the people said, asking not to be identified as the matter is private. One bank official interpreted the HKMA’s questions as a subtle request to rethink the decision.

Representatives for HSBC, Bank of China (Hong Kong) and Bank of East Asia didn’t immediately comment when asked Thursday about whether they had reversed the suspensions. The HKMA said it communicates with banks on various issues but as a matter of policy doesn’t comment on specifics. Evergrande didn’t immediately respond to requests for comment.

A reversal by the banks would offer some relief to Evergrande, whose shares and bonds have tumbled in recent weeks amid a slew of reports about wary lenders and overdue payments to suppliers. While HKMA’s motivations are unclear, its move could stoke speculation that government officials in China and Hong Kong will take steps to stem a rapid loss of faith in Evergrande that could destabilize the financial system.

Evergrande shares have fallen about 26% this week, poised for the steepest five-day tumble since March 2020. Its offshore bond due 2025 is trading at about 53 cents on the dollar, suggesting investors are bracing for a potential default.

Pressure has been mounting on Evergrande founder Hui Ka Yan to reassure markets that his company has the ability to make good on its $301 billion pile of liabilities. Analysts have said the investor exodus may resume unless Hui accelerates asset sales, brings in new strategic investors or secures a bailout from Chinese authorities.

Following reports of the mortgage suspensions, Evergrande said earlier this week it had good relationships with many banks in Hong Kong, so its local operation wouldn’t be impacted. The company declined to comment on any action by individual banks.

Evergrande said it’s sticking with plans for its Hong Kong projects, and is confident on delivering Emerald Bay II in August as scheduled. The Vertex in Cheung Sha Wan area is slated to finish by the end of October.

HSBC, Bank of China’s Hong Kong unit and Hang Seng are the biggest mortgage lenders for unfinished residential projects in Hong Kong, with HSBC providing 25% of the loans in the market in June, according to mReferral Corporation (HK) Ltd., a mortgage referral company.

Separately this week, a Chinese government official urged state-owned enterprises to raise their stakes in Shengjing Bank Co., one of Evergrande’s most valuable financial assets. The developer owns a 36% stake in the bank. Caixin Media’s WeNews reported in May that regulators were examining more than 100 billion yuan ($15.5 billion) of transactions between the bank and Evergrande.

Officials from China’s top financial regulator told Hui in a private meeting at the end of June that he should solve his company’s debt problems as quickly as possible, emphasizing the need to avoid major economic shocks, people familiar with the matter said earlier this month. Hui told the officials he’s been speaking with local governments as he looks for a solution, one of the people said.