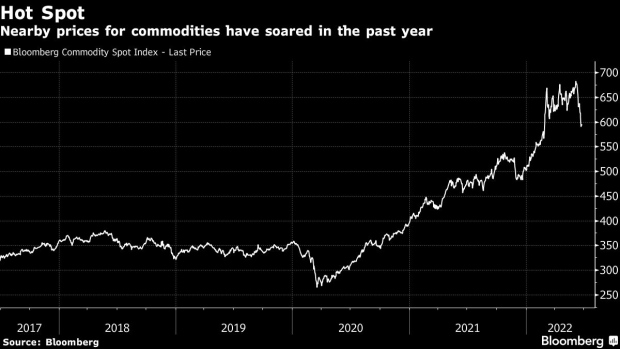 (Bloomberg) -- Major banks are ratcheting up funds for the global commodities trade as Russia’s war in Ukraine drives up prices for everything from crude oil to corn.

Lenders including ING Groep NV and Mitsubishi UFJ Financial Group Inc. are heeding traders’ calls for cash, providing lines of credit to pay for the goods they truck and ship to customers. That’s a turnaround from 2020, when a series of scandals and heavy losses prompted ING and others to scale back their exposure to the industry.

“Suddenly it’s a different market,” said Jean-Francois Lambert, founder of consulting firm Lambert Commodities. “Commodities are not only buoyant but they are totally strategic at this moment when countries and companies are reshuffling their supply chains.”

Trade finance is the lifeblood of the commodities industry, which needs access to hundreds of billions of dollars in credit to fund the buying, blending, storing and transporting of raw materials. With prices surging amid the war in Ukraine -- and supply routes disrupted by the conflict and the pandemic -- traders are clamoring for additional funds to pay for shipments of grains, metals and fuels.

“Now the commodity trade finance business is booming, who is going to say, ‘I’m just going to give it up?’” said Eric Li, research director at analytics firm Coalition Greenwich. “They want to make money -- they want to go where the revenue is growing.”

Commodity trading houses have seen earnings climb as they capitalize on wild swings in prices and arbitrage opportunities. Yet the war has also boosted volatility and sapped liquidity in derivatives markets, keeping lenders cautious. Some, such as BNP Paribas SA, have followed through on plans to draw back from commodities finance. Others, like ING, have maintained a presence.

“There is a bit of room we can grow, but it’s not going to be massive,” said Maarten Koning, head of trade and commodity finance at the Dutch bank, one of the biggest European lenders to the industry.

ING said in 2020 it would be more “strict” in lending to the sector and closed its Latin American unit the same year. But the bank has since sprung back elsewhere, hiring “close to a soccer team” in the US, Geneva and at its headquarters in Amsterdam, Koning said in an interview.

ING’s overall lending to the commodities industry is rising though remains below 2019 levels, he said, adding that clients are now using up much more of the credit lines it’s already supplied.

“Now it’s like a scarce good and people are more careful,” he said.

Bank revenues from commodity trade-finance lending increased on an annualized basis in the first quarter, according to Coalition data, and the year will likely finish above 2019 levels, Li said.

Two years ago, several European banks said they would draw away from commodities as the financial stress suffered by many trading houses led to losses for lenders. Yet some of those banks are still significant players.

“Whoever has been financing back in the day is continuing to finance it,” Li said. “They all say they are selective; what they mean by that is they want to do business with the biggest customers in the segment.”

Japanese banks are among those filling the gap since the pullback by European peers. MUFG, the country’s largest lender, is expanding its commodity trade finance business with a new desk in Amsterdam, it said Friday. The bank has also agreed to buy BNP Paribas’s commodities finance unit in the US as the French firm retreats from the sector, people with knowledge of the matter said.

Former bankers from both ABN Amro and BNP Paribas have been taken on by Credit Suisse Group AG, which expanded its lending to agricultural commodity traders in January after opening a desk with the new hires, according to a person with knowledge of the matter.

For now, most banks remain wary. Since the war in Ukraine began, extreme moves in commodity prices have become more prevalent, and some outside the industry have expressed concern about the contagion risks present in trading.

Those risks are keeping lenders on their guard even as prices strengthen, according to Lambert of Lambert Commodities.

“Banks are following their customers pragmatically,” he said. “It doesn’t mean they are coming back to commodities with a vengeance.”