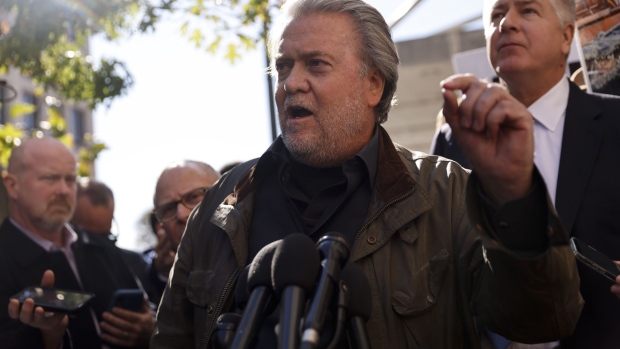 (Bloomberg) -- Donald Trump adviser Steve Bannon was ordered to testify under oath in a long-running sex-discrimination lawsuit against the former president’s 2016 campaign by a former staffer, who claims she was harassed by a male colleague who got angry when she was promoted.

Bannon, who advised Trump during the campaign and in the White House, must respond to a subpoena for documents by Feb. 24 and sit for a virtual deposition by March 31 in the suit brought by Jessica Denson, a Los Angeles-based actor who worked on the campaign, a District of Columbia Superior Court judge ruled this week.

“We are pleased that the DC Court has determined that Mr. Bannon must comply with our lawfully issued subpoena and testify in Ms. Denson’s case,” her lawyer, David Bowles, said in an email. “He, like the former president, is not above the law.”

Denson worked as a national phone-bank administrator before being promoted to organize Hispanic outreach for Trump’s campaign and says she worked directly with Bannon. She took legal action against him in Washington, where he lives, after he allegedly refused to comply with a subpoena in the suit she filed in 2017 in New York state court.

The former staffer said in a sworn affidavit last year that she saw Bannon throw the subpoena on the ground after he was served in April and say, “You can’t give me that.” Her filing included a blurry image of Bannon during the alleged incident.

Denson claims in the New York suit that she suffered from slander, harassment, cyberbullying and sexual discrimination by a male colleague, and that the campaign allegedly diminished the scope of her employment when she reported the conduct.

Trump initially won a $50,000 award against Denson after accusing her of breaching a non-disclosure agreement she signed with the campaign by going public with her allegations, but a New York appeals court threw out the award in 2020 in a ruling that said Denson had a “deep rooted” right to sue without penalty. In 2021, Denson won a court ruling voiding the NDA altogether.