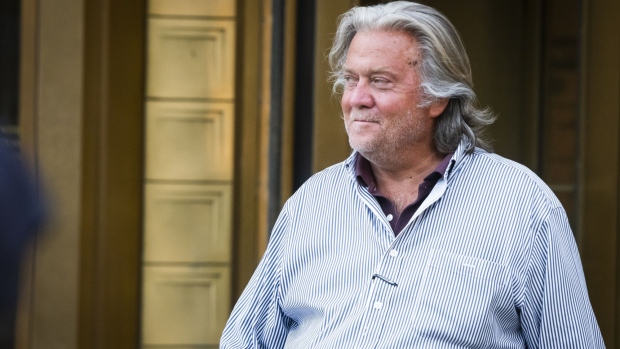 Steve Bannon, former U.S. President Donald Trump political strategist, departs from federal court in New York, U.S., on Thursday, Aug. 20, 2020. Bannon was arrested over his involvement in an online fundraising group that raised more than $25 million to help fund a wall on the U.S.-Mexico border. , Bloomberg

(Bloomberg) -- Steve Bannon, a former top aide to President Donald Trump, was ordered by a federal judge to appear before the Federal Trade Commission for questioning in an investigation into Bannon’s role in the Cambridge Analytica data-harvesting scandal.

U.S. District Judge Christopher Cooper on Tuesday granted an FTC request to order Bannon to comply with a civil investigative demand, which is similar to a subpoena, and appear for an interview.

Bannon was a vice president and board member of now-defunct Cambridge Analytica, which harvested personal information from tens of millions of Facebook Inc. users and was accused by the FTC of engaging in deceptive practices in violation of consumer protection laws. The episode led to a record $5 billion penalty against Facebook last year.

Bannon’s lawyers argued that he has already provided information to the FTC and that he is willing to appear before the agency after his upcoming criminal trial in New York, where he is facing fraud charges for allegedly diverting money from a charity that had been established to raise funds for a wall along the U.S.-Mexico border. They said the FTC’s demand could jeopardize his right to a fair trial.

Cooper said there is no substantive overlap between the FTC inquiry and the criminal case in New York and that delaying Bannon’s testimony would prevent the FTC from completing its investigation, which he said would not be in the public interest. The judge said Bannon, who helped run Trump’s 2016 campaign before becoming the president’s chief strategist in the White House, can assert his constitutional right not to answer the agency’s questions.