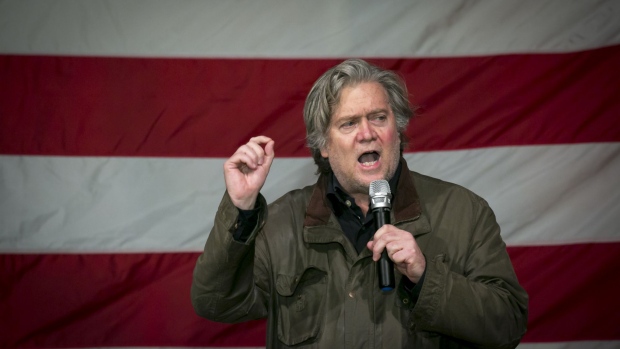 Former top Trump aide Stephen Bannon pleaded not guilty to charges he conspired to commit fraud and launder money in an online fundraising project to build a wall on the U.S.-Mexico border.

Appearing in a Lower Manhattan courtroom after his arrest earlier in the day on a yacht in Long Island Sound, a tanned Bannon with long gray hair entered his plea wearing a white mask. The 66-year-old was released on a US$5 million bond.

Prosecutors allege that Bannon defrauded hundreds of thousands of donors to the wall-building effort, We Build the Wall, by siphoning money out of the project to cover personal expenses and pay a salary to the group’s founder, despite advertising it as an entirely volunteer organization.

His indictment came on the same morning the Trump administration lost a bid to block a subpoena by the Manhattan district attorney for the president’s tax filings. And it offered an unsavory portrait of a onetime close adviser to Trump exploiting a core promise of the president’s first election campaign to enrich himself. Many of Trump’s supporters, including some who struggled financially, donated to the fundraising effort, trusting that the money would go directly to the construction of a border wall, according to prosecutors.

The arrest marks a dramatic fall for Bannon, who became an influential voice of the right at Breitbart News, ascended to power in Washington as an architect of Trump’s 2016 presidential campaign and went on to a short-lived career as White House chief strategist before falling out with the president.

We Build the Wall raised more than US$25 million, according to prosecutors. Bannon received more than US$1 million from the group and used some of it to pay personal expenses, they allege. Three others were charged, including the group’s founder, a disabled Air Force veteran named Brian Kolfage.

“The defendants defrauded hundreds of thousands of donors, capitalizing on their interest in funding a border wall to raise millions of dollars, under the false pretense that all of that money would be spent on construction,” U.S. Attorney Audrey Strauss said in a statement.

--With assistance from Christian Berthelsen.