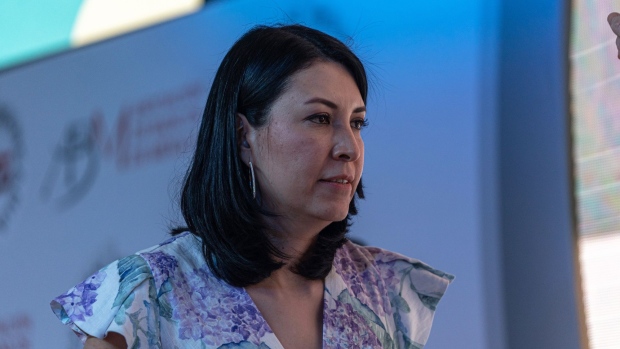 (Bloomberg) -- Mexico’s central bank boosted its growth forecast for this year and next despite a possible recession in the US, the country’s biggest trading partner, as the services sector recovered in the third quarter.

Banxico, as the central bank is known, sees gross domestic product expanding 1.8% in 2023 in the main scenario of its quarterly inflation report released Wednesday. That’s above the 1.6% expected in its previous report three months ago. For this year, the economy is seen growing 3%, also an improvement from the 2.2% previous estimate.

“The revision for 2022 is mainly due to the dynamism that the national economy has been showing throughout the year, and that was manifested in growth in the third quarter that’s higher than expected,” Banxico Governor Victoria Rodriguez said while presenting the report.

Latin America’s second-largest economy expanded faster than expected in the third quarter of 2022 on the back of climbing exports to the US and a recovery in the services sector, growing 4.3% from the same period a year earlier and 0.9% versus the previous three months.

There are strong headwinds to growth in the US, with a possible recession next year that would expose the Mexican economy’s reliance on trade with its northern neighbor. Private sector economists see GDP growing 2.5% this year, before slowing to just 0.9% in 2023, according to a Citibanamex poll.

The bank delivered its fourth-straight 75 basis-point hike this month, taking the key interest rate to an all-time high of 10%. Banxico often follows the US Federal Reserve’s decisions to stop capital leaving Mexico and damaging the peso, and has matched the Fed’s last five hikes.

The board is now debating how high the key rate can go and whether, or when, it can decouple from the Fed. Two board members who are seen as more hawkish said Wednesday the bank didn’t need to follow its northern neighbor if conditions in the two countries differed.

“When facing other types of shocks we don’t necessarily have to follow the Federal Reserve’s actions,” said Deputy Governor Irene Espinosa, who has traditionally favored tighter monetary policy. “The central message and the conclusion is that we can sometimes go in synchrony, sometimes not.”

Deputy Governor Jonathan Heath, who last week said the bank should continue “more or less in line” with the Fed in the short term, said Wednesday that Banxico could step away from the US if the two countries’ inflationary paths diverge. He argued that core inflation, which strips away volatile items like fuel, is now the most important factor in Banxico’s coming decisions.

“We have to take into account the increases already accumulated by our monetary policy,” Heath said. If core inflation peaks or not later this year, “you have to put that in the context of how we’re seeing the Fed’s decisions and what decisions we can take if the Fed doesn’t deliver a big hike or starts to slow.”

Banxico on Wednesday also maintained its inflation projection for the fourth quarter this year at 8.3%, as mentioned in its last monetary policy decision earlier this month. It sees price growth ending 2023 at 4.1%, also unchanged from its previous forecast.

Deputy Governor Gerardo Esquivel, the board’s most dovish member, is expected to leave the bank at the end of the year, with President Andres Manuel Lopez Obrador unlikely to renew his term. Deputy Finance Minister Gabriel Yorio and financial regulator Lucia Buenrostro are on most Banxico watchers’ shortlist of likely replacements.

Esquivel dissented from the last decision, backing a smaller half-point hike. The bank’s last decision of the year, on Dec. 15, comes the day after the Fed’s.

--With assistance from Carolina Gonzalez, Dale Quinn and Rafael Gayol.

(Adds comments from Heath and Espinosa from fifth paragraph)