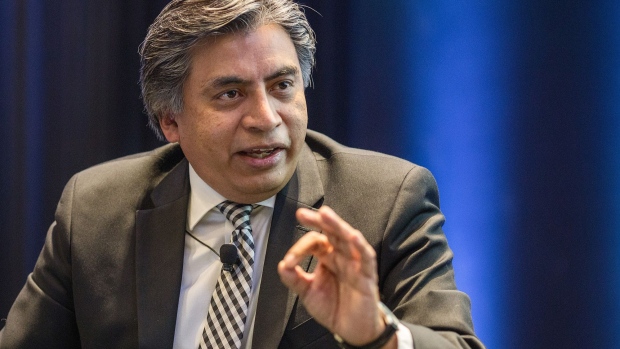 Gerardo Esquivel, economic advisor for the presidential campaign of Andres Manuel Lopez (ALMO), speaks during the Bloomberg FX18 Summit in Mexico City, Mexico, on Wednesday, March 14, 2018. The summit brings together the most important participants in the Mexican financial market to discuss the unprecedented challenges that propose to cause volatility in the economic, political, and financial sectors of the country. , Bloomberg

(Bloomberg) -- A more “aggressive adjustment” of Mexico’s monetary policy may be needed to deal with the complex risk scenario ahead, a member of the country’s central bank said, according to minutes of its last meeting released on Thursday.

The majority of the five-member board of the Banco de Mexico, known as Banxico, said that it sees upside risks to inflation in the country and warned that recent shocks could drive consumer prices and inflation expectations even higher. A lone dissenter, Deputy Governor Gerardo Esquivel, argued against hikes on the grounds that a higher key rate would not resolve factors causing inflationary pressures.

The board, which voted 4-1 to raise borrowing costs to 4.75% from 4.5% at the Sept. 30 meeting, has been split over its consecutive hikes starting in June. Most members agreed that shocks pose a risk to the price formation process and to inflation expectations, with one individual arguing a bolder increase would “seek to prevent the further strengthening of second round effects.”

“He/she stated that, for the time being, no additional risks have materialized but it is very likely that a more complex scenario will be observed, which, under a preventive approach, would require a more aggressive adjustment,” indicate the minutes, which in most cases preserve the anonymity of the comments made by the board members.

The minutes also showed that Esquivel stuck to his prior arguments that interest rate hikes were “ineffective” in a scenario in which inflation was driven by supply shocks. He maintained that raising rates could send a signal to markets that the current inflation is permanent, instead of temporary.

“Since the first increase to date, short-term expectations have only risen and therefore the sought objective has not been met,” Esquivel said, according to the notes.