Normally we would be jam packed: Alberta bar owner missing out on NHL playoff revenue

For the first time since 2017, four Canadian hockey teams have made the Stanley Cup playoffs thanks to this season’s realigned divisions as the NHL navigates the pandemic. But fans will have to cheer on their favourite players from their couch (for now at least), with all bars and restaurants in hometown cities closed due to COVID-related restrictions.

“During playoff season, there would usually be at least 10 of us at the Tipsy Moose Pub in the east end watching the game together with lots of chicken wings and Creemore Springs beer,” said Garrett Blais, office services clerk at Blake, Cassels & Graydon LLP‎, in a phone interview.

Despite living in Toronto and being a die-hard Canadiens fan, Blais said he misses the excitement that comes with a local team qualifying for playoffs.

“In a normal year there would be a whole lot more celebration since the entire city usually rallies behind its teams. By having everyone so distanced the city doesn’t get the chance to enjoy something so unifying,” he said. 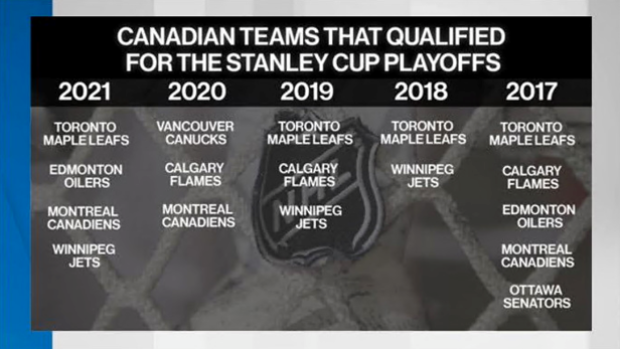 The stage is set with the Toronto Maple Leafs, Edmonton Oilers, Montreal Canadiens and Winnipeg Jets battling to advance from the North division.

As fans are forced to adapt their playoff rituals to the pandemic, they aren’t the only ones upset about closures during the post-season.

Peter Bakopanos, president of MVP Restaurant & Bar Sportif in Montreal, said he can’t even imagine how big of an impact restrictions are having on potential revenue.

“When it’s playoffs, every day is like a Saturday for demand…I have 300 seats and if I had 5,000 I would have no problem filling them all in the past,” he said.

“There’s a thirst for playoff hockey that you can’t compare to anything else here.”

While businesses get a boost from local demand during playoff season, the real surge in revenue comes from tourists.

Norman O'Reilly, director of the International Institute for Sport Business & Leadership at the University of Guelph, said with COVID-related restrictions limiting fans from traveling to see their teams play, Canadian cities could be missing out on over $10 million of potential spending from tourists.

“The bottom line is people travel for hockey. Thousands and thousands of fans will spend money to fly there, take a limo, go out for dinner, watch the playoff game and then stay at a hotel; people spend like crazy for that one night,” O'Reilly said in a phone interview.

“It’s that tourism money that’s important since it wouldn’t be there if the playoffs weren’t in that city.”

Small business owners are holding out hope that they could still capture some of that playoff demand if their hometown team goes deep enough in the playoffs.

“The Oilers finally made it after all this time and our team is doing great,” Glenn Juhnke, owner of Uncle Glenn's Eatery and Sports Pub in Edmonton, told BNN Bloomberg.

“We just need them to get as far as possible in the playoffs because the longer they last, the better our chances are that COVID could improve here and we could reopen to watch the final matches.”