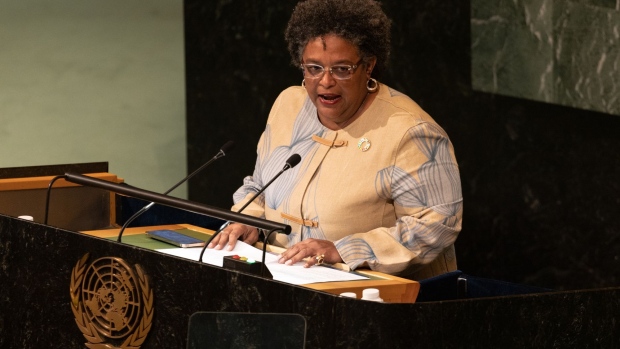 Mia Mottley, Barbados' prime minister, speaks during the United Nations General Assembly (UNGA) in New York, US, on Thursday, Sept. 22, 2022. The US and its allies got a new chance to cast Vladimir Putin as a pariah isolated on the global stage with this weeks gathering of world leaders in New York, even as the United Nations has failed to stop or even curb Russia's war in Ukraine. , Bloomberg

(Bloomberg) -- In her address to the United Nations General Assembly Thursday, Prime Minister Mia Mottley of Barbados asked leaders to embrace a more inclusive global financial architecture that better serves the majority of today’s UN member states, most of which were not involved in the World War II-era Bretton Woods Agreement that gave rise to the World Bank and the International Monetary Fund.

Such multilateral institutions “no longer serve the purpose in the 21st century that they served in the 20th century,” she said.

To address inequities in the global financial system, she asked that nations demand change. Debt should carry clauses that waive repayment during times of natural disaster or pandemic. Short-term debt should be replaced by “at least 30-year money,” she said, offering as an example the long-term debt from World War I that the United Kingdom paid off only in the last decade.

“Why, therefore, must the developing world now seek to find money within seven to 10 years, when others had the benefit of longer tenures to repay their money?” she asked.

During her first term in office, Mottley restructured Barbados’s debt with an eye toward making the country resilient to disruptive climate events. Like other Caribbean nations, Barbados is vulnerable to intensifying cyclones and rising sea levels.

Just this week, Barbados bought back $150 million of a $531 million bond due in 2029 and replaced it with lower-cost debt that carries repayment guarantees from the Nature Conservancy and the Inter-American Development Bank. That and a buyback of local-currency notes frees up about $50 million that Barbados will put toward coral reef and other protections. The country also came up with a new bond that allows for two-year suspension in the event of another pandemic, according to Reuters.

As an alternative to the global status quo, Mottley introduced in her UN speech what she called the Bridgetown Agenda, developed this summer in Barbados’s capital by civil society officials and researchers. “It is that agenda that speaks to the reform of the Bretton Woods architecture. We’ve asked and will ask countries and people to join it,” she said.

Mottley lauded Denmark, which on Tuesday announced a $13 million tranche that will help developing countries cope with loss and damage related to climate-change impacts. She listed universal needs that were being neglected including education, broadband access and the right to a bank account.

“Countries across the world are being denied the right to access correspondent banking, and leaving their citizens and their economies to function as financial pariahs in a world that is supposed to be globally interdependent for the movement of capital,” she said.

Mottley won a second term in office in January in a landslide, after successfully pulling the Barbados economy back from a period of instability. Her Barbados Labour Party won all 30 seats in parliament. Her speech in November 2021 to UN climate negotiators in Glasgow went viral after she called the world’s climate commitments “at best, reckless and, at worst, dangerous.”